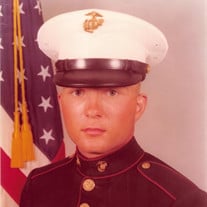 William Fred (Will or Willy) Ruby, age 59, of LaHarpe, Kansas, passed away May 18, 2021, at Medical Lodge of Fort Scott, Kansas. William was born February 1, 1962, in Iola, Kansas, to Samuel Ruby, Sr. and Lois (Sherwood) Ruby. William lived most of his life in the LaHarpe, Kansas, area. He graduated from Iola High School in 1980 and immediately enlisted in the United States Marine Corp. While home on leave, he and Christine Riebel were married October 6, 1980, in Iola, Kansas. They lived in 29 Palms, California, for four years and then moved to LaHarpe, Kansas. Upon completion of his active duty with the Marine Corp, William enlisted in the Kansas Army National Guard, where he served a tour of duty in Desert Storm and later in Iraq during the Gulf War. He retired from the Kansas Army National Guard and became an active member of the LaHarpe VFW. William's favorite hobby was riding his motorcycle and going to motorcycle rallies. William was preceded in death by his father, Samuel Ruby, Sr.; and sister, Marilyn L. Sanderson. William is survived by his wife of the home; two daughters, Kyria Ruby, Yates Center, Kansas, Savannah Burgess, LaHarpe, Kansas; mother, Lois Ruby, LaHarpe, Kansas; brother, Samuel Ruby, Jr., Iola, Kansas; sister, Carolyn Armes, Leesville, Louisiana; grandson, Taylor Burgess, Ottawa, Kansas; and granddaughter, Kinsley Thompson, Spring Hill, Kansas. A visitation will be held from 6:00 p.m. to 8:00 p.m. on Thursday, May 27, 2021, in The Venue at Feuerborn Family Funeral Service, 1883 US Highway 54, Iola, Kansas. A funeral service will be at 10:00 a.m. on Friday, May 28, 2021, in the chapel at Feuerborn Family Funeral service, Iola, Kansas. Burial with military honors will follow in the Geneva Cemetery. Memorials are suggested to the LaHarpe VFW, and may be left with Feuerborn Family Funeral Service, Iola, Kansas. Condolence for the family may be left at www.feuerbornfuneral.com.

The family of William Fred Ruby created this Life Tributes page to make it easy to share your memories.

Send flowers to the Ruby family.