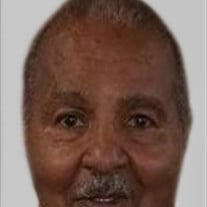 William (Bill) Harry Newman of Iola, Kansas transitioned to his eternal home on Monday, January 11, 2021 at St Francis Hospital, Wichita, KS. He was 83 years old. Bill was born December 1, 1937 in Iola, Kansas to the late William H. Newman and Estella Faye (Coker) Newman. He grew up in Iola and graduated from Iola High school. William (Bill) Newman served 4 years in the US AirForce as a Mechanical Engineer, and recieved a "Good Conduct Medal." On December 25, 1958, Bill married Jessie Lee Davis. To this marriage there were five children. He later married Frances Lewis. To this union there were three children completing his blended family. Bill retired from Consolidated Freightways in Portland, Oregon as a machinist and diesel mechanic. Bill later became the first 'African American' to be "Certified" as a "Transmission Specialist" in the state of Oregon. He retired in 1997 and moved back to Iola, Kansas. Bill became a 'Churchman' as a member of Ward Chapel A.M.E. He held the office of District Steward and Superintendent of the Sunday School until the time of his death. Bill carried on his family Legacy and Love for the church. The Newman family donated the land to the church that the original Ward Chapel was built on in 1873, where it currently resides today. When his wife Frances was living, they started a youth group in the church and did a marvelous job. They attended all the district and annual meetings as the church delegates and always brought back inspiring reports about the progress of our 5th district. He was active in all the church organizations over the years and was always a quiet presence doing whatever was asked of him. Bill assumed the job that his older sister (Ducky) had always done, looking after older members in the community to see if they had a ride to church or needed something done. Whatever our seniors in the city needed Bill was willing to help. Bill loved people and everybody loved him! Bill was highly esteemed & deeply admired by friends from all over the country. Bill’s motivation in life was his unconditional love for his family. He was adored by all family members young and old. He had a special place in his heart for all of his grandchildren, great- grandchildren & great great-grandson. Bill is survived by sons Richard (Rico) Newman, Ronnie Newman, daughter Debra (Newman) Lindsay of Portland, OR. Dawn Williams of Iola, Michelle (Newman) Simms of Temple, TX, Nicole Kinney of Texas, sisters Helen Ambler (husband) Spencer of Iola, KS & Donna (Suzie) Wright of Haysville, UT, a host of grandchildren, nephews, nieces, extended relatives and friends. He was preceded in death by his parents William H. Newman and Estella Faye (Coker) Newman Gardenhire, wife of 42 years Frances Newman,son William (Billy) Newman Jr., daughter Estella Fay Newman, brother Floyd Newman, sisters, Rosie Powers, Kathleen (Ducky) Garner & brother in laws Elliott Powers and Veron (Red) Garner. Celebration of Life services will be held for Bill at 11:00 A.M. on Wednesday, January 20, 2021 at Feuerborn Family Funeral Service in Iola, Kansas. Burial will follow at Highland Cemetery in Iola, Kansas. Masks will be required during all services. Memorials in honor of Bill are suggested to Ward Chapel Church or the William Newman Memorial Fund and may be left with Feuerborn Family Funeral Service or mailed to 1883 U.S. Highway 54, Iola, Kansas 66749. Condolences for the family may be left online at www.feuerbornfuneral.com.

The family of William "Bill" H. Newman created this Life Tributes page to make it easy to share your memories.

William (Bill) Harry Newman of Iola, Kansas transitioned to his...

Send flowers to the Newman family.