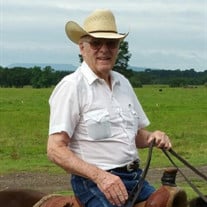 William "Willie" R. Nelson, age 88, passed away Thursday, April 1, 2021 at Via Christi Ascension Hospital in Wichita, Kansas. Willie was born August 8, 1932 to John William and Lucille Irene (McFadden) Nelson in Renfro, Oklahoma. He attended a rural school in Humboldt, Kansas. He married Barbara A. Covault on December 26, 1951 in Fort Scott, Kansas. In his early years, he worked as a pipefitter on the pipeline in Kansas City. He later farmed with his father before breaking off onto his own. Over his career he helped numerous neighbors out with their farming needs. Willie served on two co-op boards and participated in various horse clubs. He was known locally as the "Horse Whisperer". He was an active member of the First Baptist Church in Humboldt. Willie is preceded in death by his parents; wife, Barbara A. Nelson; two sisters, Ruth Rosser and Mabel Piley; sister-in-law, Betty Camac; and brother-in-laws, Harvey Piley, Gordon Rosser II, and John "Bud" Camac. Willie is survived by numerous nieces and nephews; and other family members and friends. Services to honor the life of Willie will be held at 10:00 A.M. on Friday, April 9, 2021 at Feuerborn Family Funeral Service in Iola, Kansas. Family will greet friends from 9:00 A.M. to 10:00 A.M. prior to the service. Burial will follow at Bronson Cemetery in Bronson, Kansas. Memorials in honor of Willie are suggested to the First Baptist Church of Humboldt, Kansas and may be left with the funeral home or mailed to 1883 U.S. Highway 54, Iola, Kansas 66749. Condolences for the family may be left online at www.feuerbornfuneral.com.

The family of William "Willie" R. Nelson created this Life Tributes page to make it easy to share your memories.

Send flowers to the Nelson family.