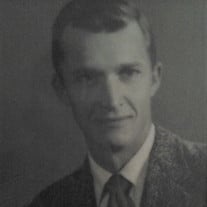 William (Bill) Holloway, 92, passed away Tuesday, January 12, 2021, at Guest Home Estates, in Garnett, Kansas. He was born May 14, 1928 in Washington, Kansas, the son of Milton and Elta (McCulley) Holloway. He married Betty Garrison and had two daughters, Denise and Gail. During those years, he dairied, farmed, had limousin cattle, and later worked as a surge dairy repairman. When family came to town to visit, they always came out to the farm. It holds many special memories for family. He and Betty divorced and he moved to Louisiana where he started a new chapter of his life. He was always an adventurer and a bit of a rebel. As a child he had his own trap line taking his furs on a bus to the city to sell then joining the navy at an early age to hopping freights, breaking horses, hiking in Colorado with nephews and hunting and fishing with nephews, fishing in Cancun and Canada, camping in the desert, gardening, growing muscadine and making wine and his fabulous walking sticks. He was preceded in death by his parents, Elta and Milton Holloway, daughter, Gail Holloway, sisters, Elta Mae Holloway and Annabel Meyers and brother, Milt Holloway. He leaves behind his oldest daughter, Denise Smith and her husband Paul, sister, Ruth Colburn and husband Kenny, two brothers, Steve Holloway and wife Adelina, brother, David Holloway and wife Debra, and many dear and loving nieces and nephews. Thank you to Good Shepherd Hospice for their care and a special thank you to the Guest Home staff for their loving care, they had become friends and family. Cremation is planned and no services are set at this time. You may send your condolences to the family at www.feuerbornfuneral.com

William (Bill) Holloway, 92, passed away Tuesday, January 12, 2021, at Guest Home Estates, in Garnett, Kansas. He was born May 14, 1928 in Washington, Kansas, the son of Milton and Elta (McCulley) Holloway. He married Betty Garrison and had... View Obituary & Service Information

The family of William D. Holloway created this Life Tributes page to make it easy to share your memories.

Send flowers to the Holloway family.