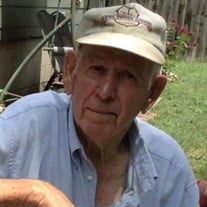 William L. “Lee” Gumfory, age 91, passed away Monday, February 22, 2021, at his home in Iola, Kansas. Lee was born September 7, 1929, to John M. and Lela B. Gumfory in Gas, Kansas. On December 31, 1949, he married Colleen Faye (Kinzle) Gumfory in Iola, Kansas. In 1946, he joined the United States Army at the age of 17.  In 1953, Lee started, owned, and operated Zero Packing Company in Iola, Kansas. He continued running the family-owned business until retiring at the age of 62. He worked as a meat processor and butcher throughout his career also. He served three terms as the city commissioner in Iola. Over the years, Lee dedicated much of his time towards coaching girls’ softball alongside of his wife. He was very proud of the fact that he built his family’s home. Lee’s favorite past time was fishing.  Lee is preceded in death by wife, Colleen; infant son, David; son, Steven; daughter, Connie; parents John and Lela; brothers, Charles, J.W. “Bud”, John, Duane, Leland, and Robert; sisters, Juanita Maple, Onella Valentine, Roberta Hutton, and Janet Mueller; and son-in-law, Joe Peters. Lee is survived by daughters, Roxy Peters and Debbie Clark, and husband, Lewis; grandchildren, Mike and Mitch Phillips, Chi Wiggin, Eric Miller, Tamera Womelsdorf, and B.J. Peters; and eight great-grandchildren. A funeral service to honor the life of Lee will be held at 10:00 A.M. on Friday, February 26, 2021, at Feuerborn Family Funeral Service in Iola, Kansas. Burial will take place following the service at Highland Cemetery in Iola, Kansas. Memorials in honor of Lee are suggested to Shriner’s Children’s Hospital or A.C.A.R.F. of LaHarpe, Kansas and may be left with the funeral home or mailed to 1883 U.S. Highway 54, Iola, Kansas 66749. Condolences for the family may be left online at www.feuerbornfuneral.com.

The family of William L. "Lee" Gumfory created this Life Tributes page to make it easy to share your memories.

Send flowers to the Gumfory family.