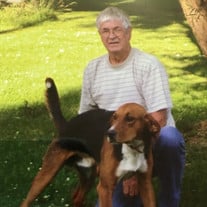 January 18, 2022, at 4:45 A.M. William "Bill" Boyd Croghan went to be with the Lord. Bill was born January 13, 1936, in Amsterdam, Missouri. He was the second of four children born to Lee and Lucy Croghan. He accepted Jesus as his Savior and was baptized at First Baptist Church in LaHarpe, Kansas. Bill graduated from LaHarpe High School, class of 1953. Their class motto was: "Before Us Lies the Lumber, Let Us Build." When drafted into the United States Army, Bill was first stationed in Fort Riley, Kansas. He was then stationed in Germany before safely returning home. He was very proud to be an American and he still flies the flag in his front yard today. On February 10, 1962, Bill married Florentina Perez in Miami, Oklahoma. To that union they were blessed with three daughters; Kim, Tammy and Dana. Bill started his contracting career with Vic Cornwell in Iola, sold insurance for a short time, then finished his career as a self-employed carpenter. Bill touched many lives over the course of his career with his unique craftsmanship and skill. He blessed many families by building multiple life-long homes in the area. One of Bill's most cherished hobbies was breeding Croghan Hounds. This Legacy still lives on today. You can find Croghan Hounds in 17 states in the United States, Canada, and Switzerland. Bill enjoyed many and excelled at all sports. "He was good at all of them!" Bill coached his daughters and many girls in town and helped develop their love for the game of softball. He was an avid outdoorsman, hunter, and fisherman. One of his greatest enjoyments was to teach his grandchildren to love the outdoors. Bill's relationship to God and family was closest to his heart. Bill attended and helped build Hope Chapel Assembly of God of Bronson, Kansas. Serving as a deacon for many years. Bill currently was a member of MidPoint Baptist Church in Moran, Kansas. Bill entered and left this world with the Lord by his side. Bill is survived by his wife, Flo "Moody" Croghan of 59 years; siblings, Jack Croghan (Kay) of Gas, Kansas, Betty Daniels of Elsmore, Kansas, Connie Wright of Edmond, Oklahoma; daughters, Kimberly Croghan-Mills (Corky) of Paola, Kansas, Tammy Emerson (Don) of Granbury, Texas, and Dana Endicott (Mike) of Moran, Kansas; grandchildren, Rustin Newman (Brittany) of LaCygne, Kansas, Corey Emerson (Maegan) of Iola, Kansas, Kaleb Newman of Ardmore, Oklahoma, Sarah Newman-Ratzlaff (Devin) of Beagle, Kansas, Josh Emerson (Hayley) of Cabot, Arkansas, Hannah Endicott of Moran, Kansas, Kohl Endicott (Amber) of Elsmore, Kansas, Kiefer Endicott of Moran, Kansas; 13 great-grandchildren; and numerous other family members and friends. A funeral service to honor the life of Bill will be held at 2:00 P.M. on Monday, January 24, 2022, at MidPoint Baptist Church in Moran, Kansas. Burial will follow at Golden Valley Cemetery in Moran. Family will greet friends from 3:00 P.M. to 5:00 P.M. on Sunday, January 23, 2022, at MidPoint Baptist, the night prior to the service. Memorials in honor of Bill are suggested to MidPoint Baptist Church or Good Shepard Hospice and can be left with Feuerborn Family Funeral Service or mailed to 1883 U.S. Highway 54, Iola, Kansas, 66749. Condolences for the family may be left online at www.feuerbornfuneral.com. William "Bill" Croghan's funeral service can be watched here: https://vimeo.com/667945515

January 18, 2022, at 4:45 A.M. William "Bill" Boyd Croghan went to be with the Lord. Bill was born January 13, 1936, in Amsterdam, Missouri. He was the second of four children born to Lee and Lucy Croghan. He accepted Jesus as his Savior... View Obituary & Service Information

The family of William "Bill" Boyd Croghan created this Life Tributes page to make it easy to share your memories.

Send flowers to the Croghan family.