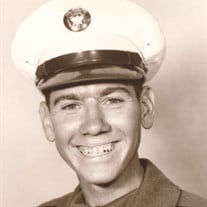 William E. (Bill) Campbell, age 87, of Iola, Kansas, passed away Sunday, December 6, 2020, at his home. Bill was born November 11, 1933, in Bethel, Kansas, to Everett Campbell and Dora (Bailes) Campbell. Bill graduated from Washington High School in Kansas City, Kansas, in 1953. He served in the United States Army from 1953 to 1955, where he was stationed in Korea during the Peace Talks. Upon his return home, Bill attended and graduated from Kansas City Business College. Bill and Gayle Scovill were married September 4, 1966, in Nowata, Oklahoma. Bill and Gayle were married 54 years and had two sons. Bill worked for Columbia Metal in Iola and Lindsborg, Kansas, and Data Documents Intelimail in Lenexa, Kansas. Bill was an avid golfer and bowler, and he bowled a perfect game three days after getting married. Bill was preceded in death by his parents; and one sister, Dora Lee Ingram. Bill is survived by his loving wife, Gayle, of the home; two sons, Thomas Campbell and wife, Julianna, College Station, Texas, and Terry Campbell, Iola, Kansas; one sister, Evelyn Calderwood, Wichita, Kansas; two aunts, Alice Conn, Lee’s Summit, Missouri, Betty Campbell, Emporia, Kansas; and numerous nieces and nephews. A visitation will be held from 12:30 p.m. to 1:30 p.m. on Friday, December 18, 2020, followed by a funeral service at 1:30 p.m. in the chapel at Feuerborn Family Funeral Service, 1883 US Highway 54, Iola, Kansas. Burial with military honors will follow in the Colony Cemetery, Colony, Kansas. Memorials are suggested to the donor’s choice, and may be left with Feuerborn Family Funeral Service. Condolences for the family may be left at www.feuerbornfuneral.com.

The family of William E. Campbell created this Life Tributes page to make it easy to share your memories.

Send flowers to the Campbell family.