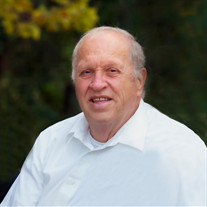 Willard Alvin Hammer, age 81, passed away on September 7, 2021 with his daughter by his side in Menifee, California. Al was born on December 7, 1939 in Iola, Kansas. He was the first of four sons born to Willard I. Agnes (Butler) Hammer. Al grew up on the family farm and graduated from Iola High School with the class of 1957. He then attended Bethany Nazarene College (now Southern Nazarene University), graduating in 1962. After college he joined the Air Force in 1964 and completed his MBA. While in the Air Force and stationed in Biloxi, Mississippi Al met Gloria Faye Wilson of Oak Hill, West Virginia, she was living with her oldest brother who was also stationed in Biloxi. On August 27, 1965 Al and Gloria were married in Oak Hill. They were blessed with one daughter, Shaun, and nearly 35 years of marriage before Gloria passed away on August 24, 2000. During his time of service in the Air Force Al was stationed in Puerto Rico, which was the favorite place he lived. Al was also stationed in Albuquerque, New Mexico, Rome, New York, Memphis, Tennessee and Greece. After retiring in 1976 from the Air Force Al worked for the Federal Government. This work took him and his family to Illinois, Maryland, and northern California. He retired the day his grandson, Xander, was born and moved to southern California to live with his daughter and her growing family. Al was at the birth of his granddaughter, Rory. He lived with Shaun and her family for the last 15 years, they were the love and joy of his life. The two most important things to Al was his faith in God and his family, it was his pleasure to take care of them as best he could. Al was preceded in death by his parents; wife, Gloria; and two brothers Rollin and Don Hammer. He is survived by his daughter, Shaun Sheets and husband, Nelson, grandson, Xander, granddaughter, Rory, all of Menifee, California; brother, Lavon Hammer of Colony, Kansas; and several nieces and nephews. Funeral services for Al Hammer will be held on Friday, September 24, at 10:30 AM at Feuerborn Family Funeral Service, Iola, Kansas. Burial with Military Honors will follow in Highland Cemetery, Iola. Condolences to the family may be left at www.feuerbornfuneral.com.

Willard Alvin Hammer, age 81, passed away on September 7, 2021 with his daughter by his side in Menifee, California. Al was born on December 7, 1939 in Iola, Kansas. He was the first of four sons born to Willard I. Agnes (Butler) Hammer.... View Obituary & Service Information

The family of Alvin Hammer created this Life Tributes page to make it easy to share your memories.

Send flowers to the Hammer family.