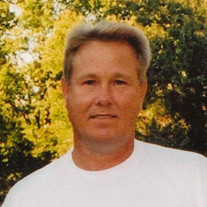 Wesley Wayne Fritz, age 58, of Garnett, Kansas, passed away on Thursday, December 3, 2020, at Olathe Hospice House in Olathe, Kansas. He was born June 6, 1962, in Kansas City, Kansas, the son of Frank LeRoy and Sharon (Elliott) Fritz. They moved to Garnett, Kansas, when Wes was 8 years old. He attended Garnett schools through his junior year of high school, and graduated from West Platte High School in Weston, Missouri with the Class of 1980. He attended Maple Woods Community College in Kansas City, Missouri. Wes married Kelley Coots on June 1, 1985, and this union was blessed with one son, J.W. He later married Chrisy Wiesner on June 22, 1990, in Garnett, Kansas. This union was blessed with five children, Sister Maria Mater Dei, Bryce, Emily, Jenna, and Hallie. Wes was a restaurant manager in his early years, and was a Fed-Ex Contractor for many years, and currently working at Wal-Mart Distribution in Ottawa, Kansas. He had an undying love for golf, Kansas Jayhawks, and the Dallas Cowboys. Wes enjoyed coaching and watching his children in sports, grilling, making salsa’s, tail-gating at KU Football games with family. His favorite child was his 9 pound malti-poo named Ce-Ce. Wes was a proud member and past president of the Garnett Country Club. He enjoyed playing in the Member Guest and Father Son Tournaments. He was a member of the Knights of Columbus. He was preceded in death by his father, Frank Fritz; two brothers, Scott Fritz and Kary Fritz. Wes is survived by his six children, Sister Maria Mater Dei, J.W., Bryce, Emily, Jenna, and Hallie; mother, Sharon Fritz of Garnett, Kansas; and wife of 30 years, Chrisy Fritz. Memorial services will be held at 10:00 a.m., on Friday, December 11, 2020, at Holy Angels Catholic Church, with inurnment to follow in the Holy Angels Cemetery. A Rosary will be held at 7:00 P.M., on Thursday evening at the church with visitation to follow. Memorial contributions may be made to the Garnett Country Club. You may send your condolences to the family at www.feuerbornfuneral.com

The family of Wesley Wayne Fritz created this Life Tributes page to make it easy to share your memories.

Wesley Wayne Fritz, age 58, of Garnett, Kansas, passed away on...

Send flowers to the Fritz family.