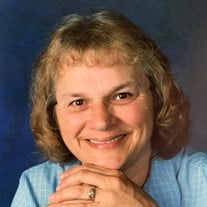 Victoria Evelyn "Vickie" Cass, age 74, of Garnett, Kansas, passed away on Sunday, February 13, 2022, at St. Luke's South Hospital in Overland Park, Kansas, surrounded by her three daughters. Vickie was born December 30, 1947, in Jackson County, Missouri, the daughter of Joseph Roe and Martha (Wallace) Crawford. Vickie "Boo Boo" married Forrest Cass on June 10, 1972, in Garnett, Kansas, this union was blessed with three daughters. She worked as a CNA for McCleod's Nursing Home for years spreading her love to others, later she worked as a machine operator at Warner's Manufacturing for many years until they went out of business, where she then joined the Anderson County Hospital in Environmental services, until she retired in 2012. Well, not technically, because she was busier after retirement with her grandbabies and great grandbabies. Vickie's greatest passion was her family and caring for people. She enjoyed gardening, taking trips, especially to Branson, where her kids and grandkids made several lasting memories, riding horses, fishing, relaxing on an afternoon drive, teaching her kids and grandkids how to bake and make her special coleslaw. Vickie loved collecting salt and pepper shakers and had over 200 sets that she has collected over the years from many places and a frog collection. She loved spending time with friends and family playing pitch that sometimes lasted till sunrise. Vickie had a heart of gold and found great joy in helping people. She opened her home and her heart to everyone she met and her smile would light up a room. She made an impact that will last forever. One of Vickie's wishes was that she be Baptized and give herself to the Lord, that was fulfilled as she was Baptized in the presence of her three daughters. She was preceded in death by her parents, Joseph Roe and Martha Crawford; one brother, Steve Roe; stepfather, Rex Crawford, and one great granddaughter, Kaycee Evelyn Young. Vickie is survived by her husband, Forrest Cass, of 50 years; three daughters, Theresa Cass of Ottawa, Kansas, Sheila Stifter of Garnett, Kansas, and Lisa Sears and husband Edward of Garnett, Kansas; eight grandchildren, Samantha Young and husband Tyler, Nicole Gibson and husband Brandon, Keith Sears and wife Alyssa, Colby Estes, Madi Sears, Cheyenne Sears, Laura Sears, and Charli Sears; five great grandchildren, Trenton, Justin, Jamison, McKinley, and Emery; an adopted sister Bonita Pulliam of lola, Kansas, sister-in-law, Faye Cass of Greeley, Kansas; three sisters, Diana Oliphant and husband Tom of Erie, Kansas, Carol Roe of LaHarpe, Kansas, Denise Morris of Arma, Kansas, three brothers, Joe Roe Jr. of Parsons, Kansas, Ronnie Roe of North Carolina, and Walter Roe of California, numerous nieces, nephews, friends, and kids she claims as her own. A ceremony in honor of her life will be held at 10:30 A.M on Saturday, February 19, 2022, at Feuerborn Funeral Home in Garnett, Kansas. Burial will follow the service at the Welda Cemetery in Welda, Kansas. Visitation will be from 6:00-8:00 P.M on Friday, February 18, 2022 at the Feuerborn Funeral Home in Garnett. Memorial contributions in honor of Vickie can be made to the Vickie Cass Memorial Fund. You may send your condolences to the family at www.feuerbornfuneral.com. Vickie Cass' funeral service can be watched here: https://vimeo.com/678892279 Vickie Cass' graveside service can be watched here: https://vimeo.com/679516367

The family of Victoria "Vickie" Cass created this Life Tributes page to make it easy to share your memories.

Send flowers to the Cass family.