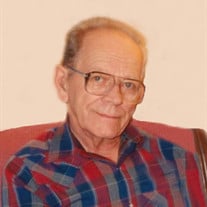 Vernon Francis Truhe, age 92, of Garnett, Kansas, passed away on Wednesday, March 31, 2021, at the Anderson County Hospital, Garnett. He was born June 1, 1928, in Valley Falls, Kansas, the son of Bernard H. and Maude Ellen (Miller) Truhe. He attended high school at Eudora and later in Paola. Vernon married Patricia McClanahan, and they had two children, Donna Gibson and Terry Truhe. Their marriage ended in divorce. Vernon married Joen Bloom on January 10, 1959, at Holy Angels Catholic Church, Garnett, Kansas. They had one son, Douglas Truhe. Vernon enjoyed many hobbies, playing music with his friends, and wood working. He was a volunteer fireman for 32 years at the Garnett Fire Department. He was preceded in death by his parents, Bernard and Maude Truhe; sisters, Agnes and Rosie; brothers, Vincent, Bernard, and Dave. Vernon is survived by his wife, Joen Truhe, of the home; children, Donna, Terry and Doug; grandchildren, Brenna, Colin and Eli; and nieces and nephews. Funeral services will be held at 10:30 a.m., on Saturday, April 3, 2021, at the Feuerborn Family Funeral Service Chapel, Garnett, with burial to follow in the Welda Cemetery, Welda. The family will greet friends at the funeral home on Friday evening from 6:00 P.M. to 8:00 P.M. Memorial contributions may be made to The Garnett Fire Department. You may send your condolences to the family at www.feuerbornfuneral.com.

The family of Vernon Francis Truhe created this Life Tributes page to make it easy to share your memories.

Send flowers to the Truhe family.