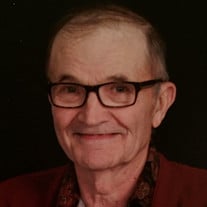 Tommy Leonard Lewis, age 82, of Garnett, Kansas, passed away on Thursday, July 8, 2021, at Menorah Medical Center, Overland Park, Kansas. He was born March 29, 1939, at his home in Leon, Kansas, the son of William Archie and Opal Winifred (White) Lewis. The family relocated to the Bush City area around 1950. His father died shortly after, and the family remained in the area. Tommy graduated from Garnett High School with the Class of 1957. He farmed until he was drafted to the United States Army from 1959 to 1962, extended seven months in Germany during the Berlin Crisis. Tommy married Betty Eileen Duff on June 4, 1966 at the Presbyterian Church of Garnett. This union was blessed with two daughters, Connie Lynelle and Janet Kay. He was known as a master carpenter, home builder, and cabinet maker in the Garnett area. His carpentry skills began at an early age with his father, and continued to develop under the guidance of Harold Aldrich and Kenneth Callahan. He carried on this mentoring tradition with Danny Whitcomb. His relationships with his customers did not end at the completion of a job, because once you got to know him, you couldn't help but love him. His skill, honesty, humility, and dedication brought many lifelong customers who became friends. While Tommy enjoyed woodcarving and fishing, he was never a man of leisure. His work defined him, and his dedication to his family and customers will be his legacy. Many beautiful homes and buildings in the area were built and maintained by Tommy, including the First Baptist Church and Farris-Feuerborn Memorial Chapel. He was an active trustee at the First Baptist Church of Garnett, and at one time served on the board of the Garnett Public Library. He enjoyed walking on the Prairie Spirit Rail Trail and recently served on the committee to develop the Anderson County Veterans Memorial. Spending days in his workshop or walking on the trail with his best friend, Pat DeVault, brought him great joy in his final years. Tom was preceded in death by his parents, Archie Lewis and Opal Kelley; his wife, Betty Lewis on February 17, 2016; and one brother, Kenny Lewis. He is survived by his two daughters, Connie Fagg and husband Scott of Garnett, Kansas; Janet Lewis and Ken Lollar of Pittsburg, Kansas; two granddaughters, Ashley Mitko of Lee's Summit, Missouri; Alisha Schainost and husband Tanner of Frontenac, Kansas; good friend, Pat DeVault; two sisters, Norma Dressler and husband Roger of Ottawa, Kansas; Nita Phipps and husband A.C. of Freedom, Pennsylvania; sister-in-law, Barbara Tornquist and husband Elmer of Hot Springs, Arkansas; many nieces and nephews, cousins and friends. Funeral services will be held at 10:30 AM, on Monday, July 12, 2021, at the First Baptist Church in Garnett, Kansas, with burial to follow in the Garnett Cemetery. The family will greet friends from 6:00 PM to 8:00 PM on Sunday evening at the Feuerborn Family Funeral Service Chapel, Garnett. Memorial contributions may be made to the First Baptist Church or toward a memorial bench at the Garnett Public Library. You may send your condolences to the family at www.feuerbornfuneral.com

The family of Tommy Leonard Lewis created this Life Tributes page to make it easy to share your memories.

Send flowers to the Lewis family.