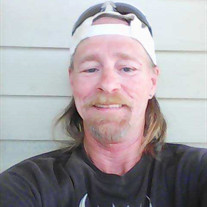 Timothy Allen Fagg, age 59, of Garnett, Kansas, passed away on Friday, April 29, 2022, at St. Luke's Hospice House, Kansas City, Missouri. He was born March 19, 1963, in Garnett, Kansas, the son of Jan and Barbara (Bentley) Fagg. Timothy attended Garnett High School and went to work for Beachner Construction and went on to get his certification in Crane Operating with IUOE Local 234, traveling in Kansas, Nebraska, Missouri, Iowa, and Oklahoma, doing various jobs. In his spare time, he loved to fish, to look for mushrooms, and was artistic, and loved his music loud. Timothy didn't ever stay in one place too long, from traveling for work and making new friends along the way. He was preceded in death by his parents, Jan Fagg and Barbara Jensen. Timothy is survived by two daughters, Karissa Fagg and Kiara Fagg, both of Garnett; mother of his two daughters, Lori White and her son, Kendall Fagg, of Garnett, Kansas; his step-father, Jerry Jensen of Garnett, Kansas; two brothers, Terry Fagg of Sayre, Alabama, Thomas Fagg and wife Crystal of Garnett, Kansas; and one sister, Christina Lytle of Tulsa, Oklahoma; four grandchildren; several nieces, nephews, and friends. PARTY ON!!! Memorial services will be held at 10:00 A.M., on Tuesday, May 10, 2022, at the First Christian Church, Garnett. The family will greet friends at the funeral home on Monday evening from 5:00 P.M. to 7:00 P.M. Memorial contributions may be made to the Timothy Fagg Memorial Fund to be used to help defray funeral costs. You may send your condolences to the family at www.feuerbornfuneral.com.

The family of Timothy Fagg created this Life Tributes page to make it easy to share your memories.

Timothy Allen Fagg, age 59, of Garnett, Kansas, passed away on...

Send flowers to the Fagg family.