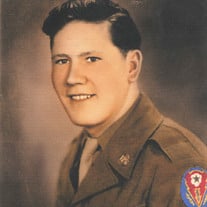 Tim Yockey, age 94, passed away Friday, July 30, 2021, at Country Place Senior Living Center in Chanute, Kansas. Tim was born April 6, 1927, to Charles H. and Cora B (Hamill) Yockey in Chanute, Kansas. Tim served in the U.S. Army as medic and military police, 1945-1946, in Germany. On June 6, 1948, he married Faye (Norman) Yockey in Iola, Kansas. Tim lived a full life surrounded by family and friends. He helped his friends build garages and do home repairs on the strength of his handshake. His word was his bond. Tim was the favorite uncle of many nieces and nephews and thoroughly enjoyed family reunions and other visits. Tim was also an avid camper, taking his wife and son on many adventures. He and Faye drove different motor homes through much of the United States and were members of the Ozark Camping Group. They were snowbirds many years in Rock Port, Texas, at the Waters Edge RV Park. Tim belonged to the Masonic Lodge for 60 years and was also a member of the American Legion and VFW. He and Faye were members of Humboldt United Methodist Church. Tim worked for the Monarch Cement Company, Humboldt, Kansas, for 42 years. In his later years, Tim expressed his love for animals by feeding the birds and keeping the bird bath clean. He delighted in the company of his dogs through the years as well. His grandsons loved him dearly. He and his cronies loved their morning coffee at H&H and solved the problems of the world daily. Tim is preceded in death by his parents, Charles H. Yockey and Cora B. (Hamill) Yockey; sisters Zelma Bailey, Doris Bockover, Jane Drake, Edith Drake, Mary Oneslager, Alice Thomas, Patty Yockey, and Sally Clark; brothers Gerald (Brov) Yockey, Dean Yockey, Robert Yockey, Charles F. Yockey, and Richard Yockey; numerous nieces, nephews, great nieces, great nephews and friends. Tim is survived by his wife, Faye Yockey, of the home; son, Wayne Yockey and wife, Rebecca (Aldridge) Yockey of Kansas City, Missouri; and grandsons, Aaron P. Yockey of Kansas City and Seth D. Yockey and partner Dr. Hannah Bradshaw of Bethel Park, Pennsylvania; and brother-in-law, Bill Thomas. Services to honor the life of Tim will take place at 10:00 A.M. on Thursday, August 5, 2021, at the United Methodist Church in Humboldt, Kansas. Burial will follow at Mount Hope Cemetery. Family will greet friends from 5:00 P.M. to 7:00 P.M., Wednesday, August 4, at Feuerborn Family Funeral Service, 1883 US Highway 54, Iola, Kansas. In lieu of flowers, memorials in honor of Tim are suggested to the Humboldt Food Pantry or Allen County Animal Rescue Facility (ACARF) of La Harpe, Kansas and may be left with the funeral home or mailed to 1883 US Hwy 54, Iola, Kansas, 66749. Condolences may be left online and service will be live streamed at www.feuerbornfuneral.com. Masks will be required at all services to honor the wishes of Tim's family.

The family of Tim Yockey created this Life Tributes page to make it easy to share your memories.

Send flowers to the Yockey family.