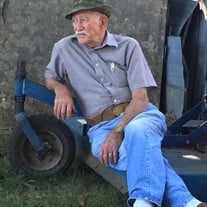 Thomas (Tom) Eugene Thompson passed away on October 18, 2021, at the age of 94 in his daughter's home in Overland Park, Kansas. He was a tough man who had fought and beaten cancer several times throughout his life, but this latest bout would prove to be his last. He is now at peace. Tom was born in Linn County, Kansas on February 12, 1927, to Bill & Myrtle (Wilson) Thompson. He grew up as the sole child on the family farm. He graduated high school in 1945. Upon graduation, Tom enlisted in the US Navy, and served briefly during World War II. After his Navy days, Tom attended Kansas State University, and graduated in 1951 with a degree in Electrical Engineering. Shortly after, he started work in Michigan, where he would spend most of his working life, with time in New York and Alabama in between. He married his first wife Marilyn in Michigan in 1954. Together they had one daughter, Julie in 1955. After 23 years of marriage, Tom lost Marilyn to cancer in 1977. Tom retired from his job at Bendix in 1977 and returned home to Kansas where he spent his days hunting, tinkering, spending time with the people he loved, and enjoying nature. Tom was married a second time to his wife Alice in 2005 in Hawaii. Tom was a shining example of everything a man can be. He was a hard worker. He was humble. He was kind. He cared deeply for his family, friends, and neighbors. He was always eager to help the people in his life in any way he could. He will be fondly remembered by all who were blessed to know him. In his final days, he shared with his family his key to such a long and happy life. He told us "If there is a trick to long life, l think it might be eat what you like, drink what you like, and be stubborn." He was preceded in death by his parents Bill & Myrtle; and his wife, Marilyn. Tom is survived by his wife, Alice; daughter, Julie and her husband James; grandchildren, Brian and his wife Marianne, Megan and her husband Daniel, and Christine and her husband Trevon; great-grandchildren, Ashton, Camden, Liam, Adeline, Charlie, and Trevon. A visitation will be held on Saturday October 30, at 10:30 a.m. until 11:30 a.m., at Feuerborn Family Funeral Service Chapel, 219 S. Oak in Garnett, Kansas. A celebration of life will follow with food and drink at the Town Hall Center, 125 W. 5th, Garnett, Kansas. In lieu of flowers, Tom and his family ask that you please consider donating on his behalf to the American Cancer Society. Donations may be made online, by phone, or mailed. https://donate.cancer.org, 1-800-227-2345, American Cancer Society Donations, PO Box 22478, Oklahoma City, OK 73123. You may send condolences to the family at www.feuerbornfuneral.com.

Thomas (Tom) Eugene Thompson passed away on October 18, 2021, at the age of 94 in his daughter's home in Overland Park, Kansas. He was a tough man who had fought and beaten cancer several times throughout his life, but this latest bout would... View Obituary & Service Information

The family of Thomas E. Thompson created this Life Tributes page to make it easy to share your memories.

Send flowers to the Thompson family.