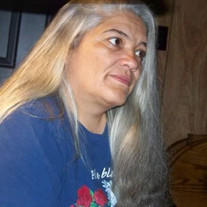 Terri Carlene Walker, age 60, of Moran, Kansas, passed away September 15, 2021, at her residence. Terri was born April 13, 1961, in Eureka, Kansas, to Carl Miller and Zella (Briggs) McVey. Terri graduated in 1979 from Iola High School. She and Mike Walker were married December 24, 1991, in Moran, Kansas. Terri worked at several local restaurants and Stubs Market. She owned the original Sunshine Café in Iola, where her mother and other family members helped her. Terri was a para-educator for Marmaton Valley Elementary School in Moran, Kansas, for many years. Being a teacher was Terri's life. She loved the students! When she had her hip replaced several years ago and was not to leave the house, she sneaked out of the house with the help of her daughter to go to school to see her students. Terri loved her family, especially spending time with her grandkids. The kids she taught, her friends, and her adopted kids were all special to her. She liked to fish, enjoyed gardening and canning, and being outdoors. Terri was known for her Halloween decorations and it was an annual event for her, and she would regularly have 400 kids trick or treat her each year. Terri was preceded in death by her mother; father; grandmother, Cora Briggs; and brother, Ricky Lee McVey. Terri is survived by her husband, Mike, of the home; daughter, Pamella (David) Pugh, Moran, Kansas; sons, Bill (Misty) Cook, Moran, Kansas, Bob (Ashley) Cook, Moran, Kansas, Bruce (April) Cook, Moran, Kansas; step-father, Dale McVey, Moran, Kansas; brothers, Joe Petrosius, Visalia, California, Rick Miller, Moran, Kansas, David (Duke) Miller, Selma, Kansas; grandchildren, Koby Pugh, Gage Adams, Justice Pugh, Ryan Pugh, Cadience Cook, Rodney Cook, Alayna Cook, Layla Cook, Robert Cook, Raiden Cook, Cooper Cook, Mason Cook, Kolby Cook, Harlie Cook, Raelyn Cook; great-grandchildren, Asher Pugh, Elnora Pugh, baby Adams not here yet; and numerous other relatives and friends. A visitation will be held from 10:00 a.m. to 11:00 a.m. on Tuesday, September 21, 2021, in The Venue at Feuerborn Family Funeral Service, 1883 US Highway 54, Iola, Kansas. A graveside service will follow the visitation at 11:30 a.m. in the LaHarpe Cemetery, LaHarpe, Kansas. Please Note: If raining, the graveside service will be held in The Venue following the visitation. Memorials are suggested to Wings of Warriors, and may be left with Feuerborn Family Funeral Service. Condolences for the family may be left at www.feuerbornfuneral.com.

The family of Terri Carlene Walker created this Life Tributes page to make it easy to share your memories.

Send flowers to the Walker family.