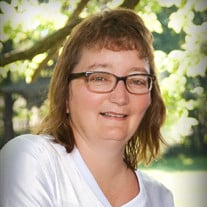 Tammy Felter Egidy, age 57, of Greeley, Kansas, was born the last of four children to Earl Felter Jr. and Charlotte (Ambler) Felter in Eureka, Kansas on August 31, 1964. She passed away on Tuesday, December 7, 2021, at Stormont Vail in Topeka, Kansas with her family by her side. Tammy met the love of her life, Terry Ray Egidy in Americus, Kansas while on a blind date on New Year's Eve in 1986. They were married in Americus in 1988. In March of 1998, they adopted their daughter Morgan and in 2000 they added Matheu to their family through adoption. She loved children and this was evident in her work experiences as well as in her devotion to her children and grandson, London. She began her career working with children at LakeMary Center in Paola, Kansas. She also worked for the Southeast Mental Health Center in Garnett and KVC in Ottawa as a case worker for children. She was at EKAN and Southeast Kansas Head Start and finished her career at K-State Research and Extension in Garnett, Kansas as the 4-H Program Manager. She also volunteered with Big Brothers and Big Sisters. Tammy and Terry were 4-H leaders for the Dynamite 4-H Club in Greeley, Kansas for several years. She served on the Future of Anderson County Education (FACE) Committee. She also received the Woman of the Year award from the Garnett Business and Professional Women. Her greatest joys were her children. She was proudest of her role as "Nonny" to grandson London. She talked with him daily and spoiled him as any grandmother should. Tammy enjoyed spending time with family, especially London. She was an avid quilter and enjoyed cooking. She was well known for her pies. Tammy was a selfless woman and gave to others of her time and talents generously. She served as a role model for her own children, the children she helped through work, and those that she served through 4-H. Tammy was preceded in death by her father, Earl Felter Jr. her mother, Charlotte Felter, one sister Carolyn Jo Felter, father-in-law Ralph William Egidy, mother-in-law Mary Ann Egidy, brothers-in-law Charles Edward Egidy, David Lee Egidy and Patrick Allen Egidy. She is survived by her husband, Terry of the home, her daughter Morgan Egidy and grandson London Egidy of Council Grove, Kansas, and her son Matheu Egidy of the home; sisters, Rose Stephenson (Royce) of Belle Plaine, Kansas and Karren (Matt) Hulse of Newton, Kansas, sisters-in-law Julie Worser (Lee) of Smithville, Missouri and Dorothy Erwin (Tim) of Viola, Kansas, two aunts, Mary Billups of Viola, Kansas and Margie Morgan of Greeley, Kansas; and grandma, Mary Rickabaugh of Greeley, Kansas. She also leaves behind loving cousins, nieces, nephews as well as great nieces and nephews. Mass of Christian Burial will be held at 10:00 AM on Saturday, December 11, 2021, at St. Boniface Catholic Church, Scipio, Kansas. Burial will follow in the St. Boniface Catholic Cemetery. A Rosary will be held at 6:30 PM Friday evening at the church, followed by a Vigil for the Deceased, where Tammy's family will be present to greet friends. Memorial contributions may be made to W.I.N.G.S., Anderson County 4-H, or to the Hope and Love of The Laity (H.A.L.L.) Fund and left in care of Feuerborn Family Funeral Service. Condolences may be sent to the family at www.feuerbornfuneral.com

Tammy Felter Egidy, age 57, of Greeley, Kansas, was born the last of four children to Earl Felter Jr. and Charlotte (Ambler) Felter in Eureka, Kansas on August 31, 1964. She passed away on Tuesday, December 7, 2021, at Stormont Vail in Topeka,... View Obituary & Service Information

The family of Tammy Lou Egidy created this Life Tributes page to make it easy to share your memories.

Send flowers to the Egidy family.