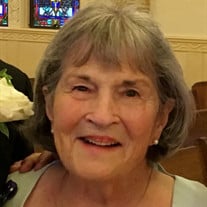 Susan Simons Caron, 84, of Garnett, KS, passed away on Easter Sunday afternoon, April 17, 2022, when her caring heart gave out after a lifetime of sharing it with all who passed through her charming home or spent time with her. Susan is survived... View Obituary & Service Information

The family of Susan Caron created this Life Tributes page to make it easy to share your memories.

Susan Simons Caron, 84, of Garnett, KS, passed away on Easter...

Send flowers to the Caron family.