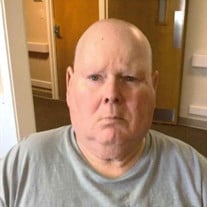 Steven Thomas Franklin, age 74, of Iola, Kansas, passed away on Saturday, November 21, 2020, at Moran Manor, Moran, Kansas. Steve was born May 6, 1946, in Junction City, Kansas, to Charles Franklin and Lillian (Stanford) Franklin. Steve graduated from the Iola High School. He and Carolyn (Wilson) Bamford Franklin were married in Iola, Kansas. Steve served his country in the United States Navy from 1964 to 1968. He served three tours in Vietnam aboard the aircraft carriers USS Enterprise and USS Kitty Hawk. Steve was a master craftsman who could fix anything, he was an excellent woodworker, and a he was a great mechanic. He built his own house and two cars from scratch. He loved his family and was known to joke a lot. Steve’s mantra was “Born To Boogy.” Steve was preceded in death by his wife; his father; and his sister, Tanya Franklin. Steve is survived by his mother; step-daughter, Teresa Farmer and husband, Terry, Humboldt, Kansas; son, Steven Hoggatt, Topeka, Kansas; step-son, Gary Bamford and wife, Cindy, Highland, California; brothers, Larry Franklin and wife, Kathryn, Lawrence, Kansas, Dennis Franklin and wife, Ruth, Welda, Kansas, sister, Marcia Hoggatt, Iola, Kansas, five grandchildren; six great-grandchildren; and numerous other relatives and friends. A graveside service with military honors will be held in Highland Cemetery, Iola, Kansas, on Wednesday, November 25, 2020, at 1:00 p.m. Memorials are suggested to the American Diabetes Association, and may be left at Feuerborn family Funeral Service, Iola, Kansas. Condolences for the family may be left at www.feuerbornfuneral.com.

The family of Steven Thomas Franklin created this Life Tributes page to make it easy to share your memories.

Send flowers to the Franklin family.