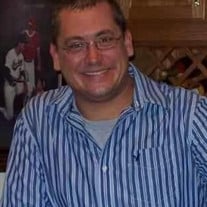 Stephen Drew Dillow, age 48, won his battle with cancer on Wednesday, July 7, 2021, in Waverly, Kansas surrounded by his family. Stephen was born August 13, 1972, to Howard and Cheryl (Johnson) Dillow in Joliet, Illinois. Stephen graduated with the class of 1990 from Iola High School. After graduating, Stephen served as a firefighter in Iola, Kansas, in the beginning of his career before attending the police academy. After graduating from the police academy, he then served as an officer and operated the K-9 Unit for the police department in Yates Center, Kansas. Stephen will be remembered for his strength. He could be found supporting his family members and making sure that they were taken care of. He lived for his family and friends and his beloved cat, Sister Sue. Stephen is preceded in death by his brother, Michael Dillow; and grandparents, Perry and Mildred Dillow, and Bill and Velma Morgan. Stephen is survived by his children, Megan Ermel and husband, Chase, and Gavin Dillow; parents, Howard Dillow and fiance, Denise Byrd, and Cheryl Dillow and fiance, Ron Drown; brother, Brian Dillow; grandchildren, Tinley, Creed, Crue, and Tally; nieces and nephew, Logan, Gracie, and Morgan Dillow; and numerous other family members and friends. Services to honor the life of Stephen will be held at 2:00 P.M. on Tuesday, July 13, 2021 at Feuerborn Family Funeral Service in Iola, Kansas. Burial will follow at Highland Cemetery. Family will greet friends from 6:00 P.M. to 8:00 P.M. in The Venue at the funeral home on Monday, July 12, 2021, the night prior to the service. Memorials in honor of Stephen are suggested to Biker's Against Child Abuse (B.A.C.A.) and may be left with the funeral home or mailed to 1883 U.S. Highway 54, Iola, Kansas, 66749. Condolences for the family may be left online at www.feuerbornfuneral.com.

The family of Stephen Drew Dillow created this Life Tributes page to make it easy to share your memories.

Send flowers to the Dillow family.