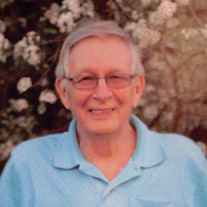 Sidney "Sid" Williamson, age 77, passed away Thursday, June 17, 2021, at his home in Gas, Kansas. Sid was born December 4, 1943, to Norman Earl and Martha Maxine (Swilley) Williamson in Toronto, Kansas. Sid started his career early in life working in the oilfield with his dad, rebuilding cars, and aspiring to be a race car driver. Over the following years, Sid worked several varied jobs for Cessna Aircraft, Toronto State Park, Lang Auto, and his favorite, Tholen's Heating & Cooling. After 2 years of college, Sid was married to Alice Reynard from Toronto. The couple made their home in Hutchinson, Kansas, then moved to Toronto where he helped his father-in-law when he was ill and unable to do all the work himself on the farm. They later moved to Iola, Kansas, then Gas. Sid and Alice were married for 56 years. The result of that union is 2 children, Brian Williamson and Diana Ambrosier. Sid loved God and showed that love in how he dealt with people. He always preferred taking care of others before himself. Sid loved the Flint Hills and growing up in Matfield Green. He will be remembered for his giving, compassion to others, ability to fix most anything, love for family and friends, and NASCAR racing. Sid is preceded in death by his father and mother, Norman and Maxine Williamson; and sister, Delores Jankovich. Sid is survived by his wife, Alice Williamson, of the home; son, Brian Williamson of Phoenix, Arizona; daughter Diana (Wade) Ambrosier of Norton, Kansas; three granddaughters, Bailey Ambrosier of Wichita, Kansas, Casey Ambrosier of Kearney, Nebraska, and Jessica Ambrosier of Norton; sister-in-law, Lenora Brown; nieces, Audra Duggins and Siera Brown of Iola. A funeral service to honor the life of Sid will be held at 10:00 A.M. on Wednesday, June 23, 2021, at Hope Chapel Assembly of God in Moran, Kansas. Burial will follow at Big Sandy Cemetery in Yates Center, Kansas. Family will greet friends from 5:00 P.M. to 7:00 P.M., Tuesday, June 22, 2021, in The Venue at Feuerborn Family Funeral Service in Iola, Kansas. Memorials in honor of Sid are suggested to Hope Chapel Assembly of God and may be left with the funeral home or mailed to 1883 U.S. Highway 54, Iola, Kansas, 66749. Condolences for the family may be left online at www.feuerbornfuneral.com.

The family of Sidney "Sid" Williamson created this Life Tributes page to make it easy to share your memories.

Send flowers to the Williamson family.