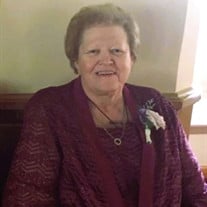 Sharon Lynn Kilet, age 76, of Garnett, Kansas, passed away on Friday, April 29, 2022, at her home. She was born May 11, 1945, in Garnett, Kansas, the daughter of Wilbur "Wig" and Wilma (Ashburn) McCain. She graduated from Garnett High School with the Class of 1963. Sharon married Mike Kilet on September 1, 1964, in Garnett, Kansas. This union was blessed with three daughters. Sharon worked at Warner Manufacturing as a seamstress until she retired in July 1998. Sharon was a 4-H Club and Project leader and a member of the VFW Ladies Auxiliary. Sharon enjoyed sewing, reading, mushroom hunting and fishing. She was an avid KU Jayhawk Men's Basketball and Kansas City Chiefs fan. One of her greatest loves was spending time with her grandchildren. Sharon will always be known for her tremendous listening skills, hospitable home, chocolate chip cookies and never ending helping hand. She became a confidante and friend to many over the years. She was preceded in death by her parents, Wig and Wilma McCain; two brothers, Ronnie McCain and Gene McCain; and one grandson, Kolt Allen. Sharon is survived by her husband of 57 years, Mike Kilet of the home; three daughters, Shelly Bargmann and husband Lynn of Bremen, Kansas, Kelli Allen and husband Lucas of Llano, Texas, Jody Newton and Alan of Garnett, Kansas; six grandchildren, Shelby Siemens and husband Nathan, Chris Bargmann and wife Baleigh, Lafe Allen and wife Brittney, Laramie Allen, Hayden and Hank Newton; four great grandchildren, Wesley and Levi Siemens, Corbyn Bargmann and Lano Allen; one sister, Tereasa Hamm and Stan Pattison of Garnett, Kansas; one sister-in-law, Mary McCain of Garnett, Kansas; several nieces, nephews, and friends. Funeral services will be held at 10:00 A.M., on Wednesday, May 4, 2022, at Feuerborn Family Funeral Service Chapel in Garnett, Kansas, with burial to follow in the Garnett Cemetery, Garnett. The family will greet friends at the funeral home on Tuesday evening from 6:00 PM to 8:00 PM. Memorial contributions may be made to Anderson County 4-H. You may send your condolences to the family at www.feuerbornfuneral.com.

Sharon Lynn Kilet, age 76, of Garnett, Kansas, passed away on Friday, April 29, 2022, at her home. She was born May 11, 1945, in Garnett, Kansas, the daughter of Wilbur "Wig" and Wilma (Ashburn) McCain. She graduated from Garnett High School... View Obituary & Service Information

The family of Sharon Lynn Kilet created this Life Tributes page to make it easy to share your memories.

Sharon Lynn Kilet, age 76, of Garnett, Kansas, passed away on...

Send flowers to the Kilet family.