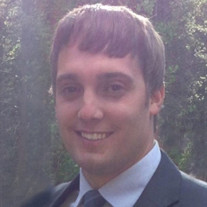 Samuel Bolton, age 31, of Lawrence, Kansas, passed away on Friday, January 8, 2021. Sam was born June 22, 1989 in Wichita, Kansas, but grew up in St. Libory, Nebraska. He was raised on his family’s farm, where he loved spending time with his menagerie of animals, including dogs, cats, ducks, and cows. He had a lot of interests, but particularly enjoyed fixing things. He had a very mechanical mind and was always curious about the process on why things were the way they were. Those interests translated into fixing cars, bikes, and a deep curiosity about human anatomy. He had an abundance of childhood friends that he would romp around with on their four-wheelers - friendships that carried into adulthood and that he deeply cherished. He was also loved by his extended family, and he adored spending time with his cousins and grandparents. He was a gentle and complicated soul, but at his core, he was loyal and committed to those he loved. In high school at Grand Island Central Catholic, Sam succeeded in football, basketball, and track. He competed at annual State competitions for the triple jump and as a center on the basketball team. He was a fierce competitor, but he mostly enjoyed being a part of a team. When it came time to go to college, Sam was deciding whether to continue to play football or pivot into a new area of interest. He was recruited heavily by some of the top schools in the country, including Yale, Northwestern, and Stanford, among others for his achievements on the football field and in the classroom. Ultimately, he decided to attend the University of Kansas as a third generation Jayhawk to study chemistry. He graduated with academic honors and as a member Phi Beta Kappa, the top national honor society. Like many KU students, Sam loved attending football and basketball games. He was a mastermind in the sciences and spent a lot of his time serving as a teaching assistant in the chemistry department. Sam’s sister, Hannah, attended KU in the class below him, and they spent most of their college days together, just like in childhood. They loved studying together and spending time with their friends at Clinton Lake. Sam helped many of Hannah’s friends with a plethora of car issues and leaky faucets - that mechanical mindset gave him a leg up with any and all handyman duties (whether he wanted to or not). He thrived when helping others, and he never complained. He would do anything for his sister, and that sentiment was shared throughout their life together. Sam is survived by his parents, Mark Bolton and Kellee (Feuerborn) Bolton, and his sister, Hannah Bolton. He was preceded in death by his grandparents, Myron and Mary Feuerborn; grandparents, Victor and Natalie Bolton; and his lifetime best friend, AJ Sabin. Cremation has taken place and no services are planned at this time. A private family celebration will take place at a later date. In lieu of flowers, the family is requesting donations be made to the Lawrence Humane Society Crisis Pet Retention program to keep pets with their families during financial or circumstantial hardship. Donations may be left with Feuerborn Family Funeral Service, 219 S. Oak St., Garnett, Kansas 66032 or made directly to the Lawrence Humane Society via an online donation: https://lawrencehumane.org/donate/

The family of Sam Bolton created this Life Tributes page to make it easy to share your memories.

Samuel Bolton, age 31, of Lawrence, Kansas, passed away on Friday,...

Send flowers to the Bolton family.