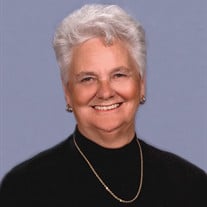 Ruth Frances Lickteig, age 83, of Greeley, Kansas, passed away on Thursday, January 28, 2021, at Olathe Medical Center in Olathe, Kansas. Ruth was the third of ten children born to William H. and Margarette Cecilia (Brugger) Talley. She was born on April 26, 1937, in Tulsa, Oklahoma where she grew up and graduated from Marquette High School, Tulsa in 1955. On April 4, 1959 Ruth was united in marriage to Leroy Lickteig, at St. Francis Church in Tulsa, Oklahoma. This union was blessed with four children, Dan, Dennis, Jim and Shari. Ruth was a loving and dedicated wife to Leroy for sixty-one years. Over the course of those years, their business had many partnerships, but Leroy and Ruth’s union was the most successful partnership of all. Ruth spent her life devoted to her faith as a devout member of St. John’s Catholic Church. You could always find her entering the side door of church and sitting in the third pew with Leroy. Church activities were a priority to Ruth and she willingly gave of her time to serve on the altar society and the church council. For many years she spent her Friday mornings putting together the church bulletin. Ruth was an integral part of the fall bazaar, she delighted in helping to make the bazaar a success. Each year was viewed as a competition to beat their previous record. She then loved sharing the number of people that were fed for months. You knew if they weren’t in church on Sunday they were traveling together to various destinations inside and outside of the country. Leroy would say, “Ruth was always ready for the next adventure. She would go anywhere I wanted to go.” The community of Greeley benefitted from her presence as well. Ruth was very active in the community events for several years. One of her biggest impacts was her presence along with her sisters at the annual softball tournament. Anyone that attended the tournaments waited in anticipation for their arrival for the 8 a.m. game. Their enthusiasm and humor never disappointed. People gravitated to Ruth. She touched so many lives with her constant humor, passion for life, selflessness, kindness, and simple ways. She was without a doubt, the life of the party and would want to be remembered that way. She was preceded in death by her parents, Bill and Margarette Talley; two sisters, Norma Dulany and Marie Bollinger. Ruth was a gift from God to her family, she always put them first. When her children needed a hand, she was there. Ruth was an example for all of them, her legacy will live on through her family as they strive to be half the person she was. She leaves behind a dedicated family that will talk lovingly and laughingly about her, including, her husband, Leroy, of the home; their children, Dan Lickteig and wife, Deb of Richmond, Kansas, Dennis Lickteig and wife, Anita of Olathe, Kansas, Jim Lickteig and Norma Jean of Richmond, Kansas, and Shari Mount and husband, Mike of Overland Park, Kansas. Ruth touched not only her children’s lives but her eight grandchildren as well, Scott Lickteig, Blake Lickteig, Katie Lickteig, Brooke Griffin, Emily Swan, Faith Mount, Julia Mount, McKenna Mount and six great-grandchildren, who lovingly knew her as “GiGi”, Levi, Ella, Collins, Isabella, Beckett and Corbin. Her six brothers and one sister, Bill Talley of Tulsa, Oklahoma, Jim Talley and wife, Sue of Bixby, Oklahoma, Ray Talley and wife, Carol and Betty Moore and husband, John of Owasso, Oklahoma, Mack Talley and Ann of Tulsa, Oklahoma, Paul Talley and Doug Talley and wife, Debbie all of Tulsa, Oklahoma. We all look forward to sharing her stories with those who never had the privilege of knowing her. Mass of Christian Burial will be held at 10:30 AM, Tuesday, February 2, 2021, at St. John’s Catholic Church in Greeley, Kansas. Burial will follow in the St. John’s Cemetery. The family will greet friends following a 6:00 PM Rosary on Monday evening at the church in Greeley. Memorial contributions may be made to St. John’s Church, for the roof fund and left in care of Feuerborn Family Funeral Service, 219 S. Oak St., Garnett, Kansas 66032. Condolences may be left for the family at www.feuerbornfuneral.com.

The family of Ruth Lickteig created this Life Tributes page to make it easy to share your memories.