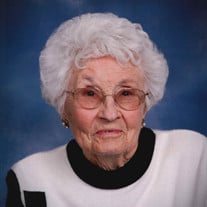 Ruby Irene Schuster, age 100, of Garnett, Kansas, passed away on Tuesday, September 1, 2020, at her home with her daughter and son-in-law by her side. Ruby Spears was born on December 14, 1919, the only child of DeArmand and Anna (Crabtree) Spears, in Johnston, Missouri. She and her parents moved to Garnett in 1929, where her father was manager of the A&P Store. Ruby often recalled helping at the store with her mother, standing on boxes to reach items, sleeping behind the counter waiting for customers to return to pick up their groceries, after attending a movie at the theater. Ruby attended Longfellow and Irving schools, and graduated from Garnett High School in 1936. Her family moved whenever she changed schools so she could walk to them. She attended Baker University for one semester and pledged Alpha Chi Omega. Ruby always loved to drive, she told of learning to drive when she was about 10 years old. While in high school she did a lot of driving while on a family trip to Chicago while in high school and then on a trip to New Orleans with girlfriends. Ruby and Paul Woodrow Schuster were married March 7, 1942, in Chanute, Kansas, and enjoyed 61 years together before his death on May 3, 2003. Becoming a Schuster with Paul’s eight siblings was an adjustment for an only child. Ruby and Paul were blessed with two children, Barbara Jean and Paul Eugene “Pete”. As a newlywed and Paul off to WWII, Ruby was befriended by a sweet neighbor, Hattie Skiles, who taught her homemaking skills and assisted with the new baby, and was a longtime friend. Ruby had a wide variety of work experiences over 46 years. Throughout her different jobs, Ruby always enjoyed working with people. Some of the places she worked included Maggio's 5 & 10, Brundredge Oil office, Sewing Factory above GSSB, where she worked for Ben Kay. Ruby also worked at the ASCS Office, Anderson Countian, Garnett Publishing Co., Webster’s Jewelry (a favorite), before retiring from Greeley COOP in 1981. She was baptized May 26, 1946 at Garnett First Christian Church, a 74 year member. Partaking in communion was most important to her; she and Paul would always stop for Sunday communion at churches during their travels. She taught Sunday School, worked at the FCC fair food stand for many years, and assisted at many church funeral dinners. Ruby was a long time member of the Sunset Garden Club, a life member of the VFW Auxiliary, Daughters of the Nile, Eastern Star, and played with many ladies’ bridge and pitch groups over the years. Paul and Ruby had a passion for auctions, especially during the time their son Paul was in Vietnam, sales helped pass the days waiting for his safe return. They enjoyed spending a winter month or two in Texas or Arizona after their retirement. Often a group of 10-12 couples from Garnett would meet up together. They were long time supporters of the Garnett Senior Center - delivering meals, as well as eating in and enjoying the fellowship there, until she was 95! They also worked for the beginning of the local Rail Trail. She would always say how Garnett was the best place to live. She loved the community. All who knew her knew of her extreme love for ice cream, homemade or store bought, which became a staple for her in her last years!! Paul and Ruby supported their grandkids baseball, football, track and band concerts, often traveling around Kansas to watch. Ruby was preceded in death by her parents, DeArmand and Anna Spears; her husband, Paul Schuster; and great grandson, Maxwell Ratliff. She is survived by her daughter, Barbara Ratliff and husband Bill of Garnett; her son, Paul Schuster and wife Sue of Lawrence, Kansas; eight grandchildren, Paula Wilson of Glendale, Arizona; Tom Ratliff of Dossenheim, Germany; Josh Ratliff of Overland Park, Kansas; Beth Novak of Sun City West, Arizona; Miranda Wilhelm of Edwardsville, Illinois; Charles Schuster of New Strawn, Kansas; Amy Aber of Murfreesboro, Tennessee; and Emily Lorg of Olathe, Kansas; 16 great grands, Russell Wilson and wife Mary Frances; Marlee, Jenna and Whitney Wilson; Levon Ratliff; Elsa, Caroline and Henry Ratliff; Jax and Chase Novak; Aurora Wilhelm; Ryan and Reagan Schuster; Madison Coursen, Natalie Strawder, and Penelope Lorg. Ruby’s memory will live on in some of her favorite pet phrases: Schudely-do, good governor, holy kitten-britches, gad, what a mess, handy as a pocket in your shirt, what are we going to do now, let’s go, hate to wash all those windows, and the golden years not what they’re cracked up to be. Funeral services will be held at 10:30 AM, Saturday, September 5, 2020 at the First Christian Church, Garnett. The family will greet friends from 10:00 AM until the start of the service on Saturday at the church. Burial will follow in the Garnett Cemetery. Memorial contributions may be made to the Garnett Senior Center and left in care of the funeral home. Condolences may be sent to the family at www.feuerbornfuneral.com.

Ruby Irene Schuster, age 100, of Garnett, Kansas, passed away on Tuesday, September 1, 2020, at her home with her daughter and son-in-law by her side. Ruby Spears was born on December 14, 1919, the only child of DeArmand and Anna (Crabtree)... View Obituary & Service Information

The family of Ruby Irene Schuster created this Life Tributes page to make it easy to share your memories.

Send flowers to the Schuster family.