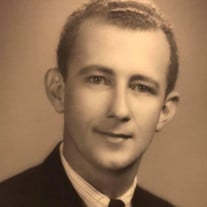 Ron&#8217;s greatest joy was his family, especially his children and grandchildren. He was blessed with many great experiences and lived a very full, happy life. Ron is survived by his wife of 46 years Claudia Anne Johnson Bartlett, son Alexander... View Obituary & Service Information

The family of Mr. Ronald Braden Bartlett created this Life Tributes page to make it easy to share your memories.

Ron’s greatest joy was his family, especially his children and...

Send flowers to the Bartlett family.