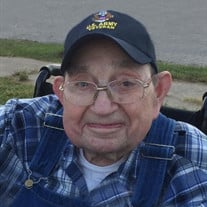 Rollin Eugene Henderson, age 98, of Kincaid, Kansas passed away on Monday, October 26, 2020, at the Residential Living Center in Garnett, Kansas. He was born in Selma, Kansas, on May 26, 1922, the son of James Monroe and Lela (Rosell) Henderson. He grew up in Selma, Kansas, and went to school through the 8th grade. The high school was four miles from his family's homestead so it was too far to walk daily. It was decided that he would work full time on the farm with his family. In 1942, at the age of 20, Rollin was drafted into the United States Army. He was sent to Camp Barkley in Texas for training. Rollin finished in the top of his class, in the medical field. He later was sent to the Aleutian Islands off the coast of Alaska where it was bitter cold. He then finished his military career in Germany, where his task was to protect German soldiers and German civilians. He was in the Army for 37 months. Rollin purchased his 160-acre farm three miles east of Kincaid. He proudly took care of his parents, raised cattle, and worked the farm ground. Rollin retired from farming in 2012. Rollin was a member of the Selma Methodist Church, American Legion, participated in the Kincaid Fair, and served local farmers coffee at the Kincaid Coffee Shop daily. He enjoyed trapping and hunting. Even more, he enjoyed telling his stories of what he trapped with good friends. Rollin played various musical instruments and enjoyed singing with friends and family. Rollin was preceded in death by his parents; two brothers, James Milburn Henderson and Willis Jennings Henderson, and a sister, Genevieve Seitz. He is survived by his nieces and nephews, Deanna and Wilbur Fleming, Jimmy Ray Henderson, Jimmy Harland and Susan Seitz; cousins, Donna Sue and Loren Sayers, Judy Henderson; and great nieces and nephews, Mindy and David McGinnis, Janna Jo Henderson, Jerry Henderson; great great nieces and nephews, Trey Holston and Tacy Holston; and great cousins, Sarah and Harold Kennington, Margaret and Doug Chambers, Garen and Jamie Henderson, and Brittni and Jon Dangers. Graveside services will be held at 1:00 PM on Monday, November 2, 2020, at the Kincaid Cemetery in Kincaid, Kansas on Texas Road. Mask wearing is requested as well as social distancing. Memorial contributions may be made to Residential Living Center or Crossroads Hospice and left in care of Feuerborn Family Funeral Service.

Rollin Eugene Henderson, age 98, of Kincaid, Kansas passed away on Monday, October 26, 2020, at the Residential Living Center in Garnett, Kansas. He was born in Selma, Kansas, on May 26, 1922, the son of James Monroe and Lela (Rosell) Henderson.... View Obituary & Service Information

The family of Rollin Eugene Henderson created this Life Tributes page to make it easy to share your memories.

Send flowers to the Henderson family.