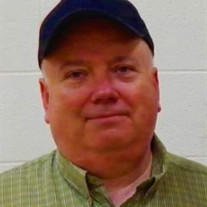 Mark Spillman, 59, of Moran, KS passed away Thursday, September 9, 2021. Roland Mark Spillman, II was born October 7, 1961 in Bayonne, New Jersey to Roland and Jolienne (Hatcher) Spillman while Rol was stationed there with his job with Sinclair Pipeline. The family lived in several locations until locating to Overland Park, KS where Mark attended Arrowhead Elementary and Milburn Junior High. In 1977, the family decided to move to Moran and build a house. Mark entered Marmaton Valley High School where he and Jenny met and fell in love. Mark graduated from MVHS in 1980. Mark worked for the MKT (Katy) Railroad for a year, then attended Allen County Community College before transferring to Pittsburg State University. At PSU, he earned his Bachelor of Science, Master of Science, and his Specialist in Education with a major in School Psychology. While attending PSU, Mark was a proud member of ROTC Gorilla Company. After earning his degrees at PSU, he worked as an Adjunct Professor for ACCC teaching Ethics and Sociology and in December 1987, accepted a job with Chautauqua and Elk County Special Education Services and later with Tri-County Special Education Cooperative in Independence. On February 20, 1988, Mark and Jenny were united in marriage at the Moran Christian Church. They lived in Elk and Montgomery counties for 11 years before moving back to Moran in 1999. They had decided it was time to start a family, and they wanted their children to grow up near their grandparents. Sarah was born in 2000, and Jeff completed the family in 2005. Mark was proud to have served on the Marmaton Valley Board of Education, the ANW Special Education Cooperative Board, and had been recently appointed to serve on the 31st Judicial District Nominating Commission. He also loved coaching and being involved in youth athletics, there was no one who would cheer louder than he did! He is survived by his wife, Jenny, his daughter, Sarah, his son, Jeff, and Sarah's boyfriend, Noah. He is also survived by his aunt Janice Culbertson, his in-laws, Nancy and Wayne Chandler, and so many cousins and friends that there is no way to list them all. A funeral service to honor the life of Mark will be held at 10:00 A.M. on Thursday, September 23, 2021, at the Moran Christian Church in Moran, Kansas. Burial will follow at the Moran Cemetery after the service. Memorials in honor of Mark are suggested to the Mark Spillman Memorial Fund to go towards the education fund of his two beloved children, Sarah and Jeff. These memorials may be left with Feuerborn Family Funeral Service in Iola, Kansas or mailed to 1883 U.S. Highway 54, Iola, Kansas, 66749. Condolences for the family may be left online at www.feuerbornfuneral.com.

Mark Spillman, 59, of Moran, KS passed away Thursday, September 9, 2021. Roland Mark Spillman, II was born October 7, 1961 in Bayonne, New Jersey to Roland and Jolienne (Hatcher) Spillman while Rol was stationed there with his job with Sinclair... View Obituary & Service Information

The family of Roland Mark Spillman, II created this Life Tributes page to make it easy to share your memories.

Send flowers to the Spillman family.