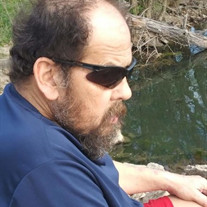 Roger "Rabbit" Dale Roberts, age 57, passed away at home surrounded by his family on Saturday, May 29, 2021 thru Midland Hospice Care, in Topeka Kansas. Roger was born on October 24, 1963 in Iola, Kansas, to Marvin William Roberts and Velma Eileen Kellerman, the baby of seven children. He grew up in the surrounding areas of Franklin and Anderson counties. Roger met the love of his life in the summer of 1983; Cynthia Ann Ross; marrying on October 22, 1983. This union was blessed with four children; one being their oldest grandchild whom they adopted in 2005. This marriage lasted 28 years, ending in divorce in 2012. But remaining best friends and family and rekindling their love in 2019. Roger worked many different jobs. He was a carpenter for many years, roofing, shingling and sheet rocking houses. He worked at Day Windows making windows and storm doors and delivered them as well. He worked at TLC Auto in recycling and hauling cars and trucks. He worked in the oilfields as well. Later in life with his passion for recycling, he hauled and recycled all kinds of metal. Roger enjoyed the outdoors, taking many camping and canoeing trips with family and friends. He enjoyed rattlesnake hunting and mushroom hunting. Fishing was his main passion. You could always find him with his fishing gear ready and waiting for that under water bridge. Lake or river fishing many nights for those big flatheads. His greatest joy was being a father and grandfather. After suffering a major heart attack, and stroke which ended with the loss of his right leg and the function of his kidneys, he came home on hospice and spent the rest of his days with his kids and grandkids and the love of his life, Cynthia; enjoying the outdoors, country cruising, picnicking and fishing. He was preceded in death by his parents, Velma Eileen Kellerman Canfield and Marvin William Roberts; a brother, Leonard Joseph Roberts, and a sister, Jolene Denise Burnett ; his infant son, Joshua Dale Roberts and a granddaughter, Stevie Ann Turner. He is survived by his spouse, Cynthia Ann Roberts; daughter, Anna Turner and spouse, Robert Mullin; son, Tobias Roberts; daughter, Andrea Roberts; daughter-in-law and son-in-law, Christina and Eugene Patton; grandchildren, Ioa Turner, Zenobia Patton, Jeremiah and Joshua Patton, Joseph Roberts, and Raiden Mullin; a sister, Gloria Bishop; brother, John Roberts and wife Cathy; brother, Ricky Roberts and wife Bonnie; brother, Dennis Roberts and wife LaNita; numerous nieces and nephews, great nieces and nephews; aunts, uncles, and friends. Funeral services will be held at 11:00 a.m., on Friday, June 4, 2021, at the Feuerborn Family Funeral Service Chapel in Garnett. Memorial contributions may be made to the Roger Roberts Memorial Fund.

Roger "Rabbit" Dale Roberts, age 57, passed away at home surrounded by his family on Saturday, May 29, 2021 thru Midland Hospice Care, in Topeka Kansas. Roger was born on October 24, 1963 in Iola, Kansas, to Marvin William Roberts and Velma... View Obituary & Service Information

The family of Roger Dale Roberts created this Life Tributes page to make it easy to share your memories.

Send flowers to the Roberts family.