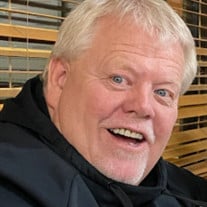 Roger D. Collins, age 60, of Iola, Kansas, passed away on Monday, February 7, 2022, while holding Billie's hand at Select Specialty Hospital in Dallas, Texas, after a long battle with COVID complications. Roger was born on February 1, 1962, in Iola, Kansas, to Harvey and Lillie (Sheat) Collins. He graduated from Iola Senior High School before furthering his education at Allen County Community College on a Baseball Scholarship. On August 12, 1989, Roger married Billie Cunningham at the First Nazarene Church in Iola, Kansas. Their union was blessed with three amazing children and countless others that are not biological. Roger, in high school, worked at Central Sporting Goods. After college, Roger went straight into working at Central Publishing Company (both companies were started by his parents when he was a child) where he worked his way up from setup man, to salesman/pressman, and eventually into the role of President and CEO. Roger lived his life loving his family, friends, and all others. He did not ever meet a stranger. Many of his customers said he was like that cousin you saw once a year at a reunion and you picked up where you left off every time you spoke. One of the many ways that he loved others was sharing his love of baseball. Roger was passionate about making an impact on the boys he coached. Teaching them how to play the game and how it reflects on life. Roger would often say, "Those aren't only my players, they are part of my family." Roger made it a point to have a personal relationship with all of his players and continued those relationships well beyond his coaching years. Roger loved his family far more than he could ever put into words. He led by example teaching them to love one another and always put family first. He was always quick to say, "I Love You", "You make me proud", and "Thank you for everything you do!" He was also quick to say, "If you start something, you finish what you started". Roger was an incredible husband, dad, father-in-law, friend, coach, and his favorite title, Papa. He was preceded in death by his parents Harvey and Lillie Collins;and three brothers, Billy Collins (infant), Harvey Collins, and Harry Collins. He is survived by his wife, Billie, of the home; daughter, Courtney and husband, Brandon Andres, and their children, Bryce, Conor, Parker and Benji of Iola; son, Kris and his wife, Kylie Collins, and their daughter, Kinley, of Ottawa, Kansas; and daughter, Darci Collins, of the home. He is also survived by his two brothers, Dean (Sandy) Collins of Bella Vista, Arkansas, and Gary (Barb) Collins of Oklahoma City, Oklahoma; and sister, Linda Bass. Roger also had many nieces, nephews, cousins, and friends that held a very special place in his heart. "Family isn't always blood, it's the people in your life who want you in theirs: the ones who accept you for who you are, the ones who would do anything to see you smile and who love you no matter what." - Maya Angelou A Celebration of Life service to honor Roger's life will be held at 10:00 A.M. on Saturday, February 26, 2022, at Feuerborn Family Funeral Service in Iola, Kansas. Inurnment will follow the service at Highland Cemetery in Iola. Family will greet friends the night prior to the service on Friday, February 25, 2022, from 6:00 P.M. to 8:00 P.M. in The Venue at the funeral home. In lieu of flowers, memorials in honor of Roger are suggested to CollinsAintQuitters to help defer medical expenses and may be left with the funeral home or mailed to 1883 U.S. Highway 54, Iola, Kansas, 66749. Condolences for the family may be left online at www.feuerbornfuneral.com. Roger Collins' memorial service can be watched here: https://vimeo.com/682223760

The family of Roger Dale Collins created this Life Tributes page to make it easy to share your memories.

Send flowers to the Collins family.