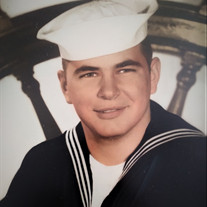 Robert "Bob" E. Trammell, age 76, of Uniontown, Kansas, went to his heavenly home on Thursday, November 18, 2021. His devotion to his family and his firm belief in God supported him and ultimately gave him peace. Bob was born on May 7, 1945, to Roy and Margaret (Moore) Trammell in Iola, Kansas. He graduated from Humboldt High School in 1963. He and two of his close friends left Humboldt shortly after graduating high school to join the Coast Guard. Bob was stationed in Chicago Harbor, Wisconsin, Minnesota, and Michigan on Lake Superior from 1963-1971. Bob met his wife, Sally Kleinhenz, whom he was married to for 36 years, during his stint in the Coast Guard. They married on June 4, 1966, in Harbor Springs, Michigan. Unbeknownst to them at the time, the Catholic Church they were married in became the subject of numerous beautiful paintings, sketches, and even famous photographs. His interests included family, all kinds of music - especially classic country and gospel; singing - his voice was as smooth as buttermilk and so deep that if he was sitting in church, it vibrated the whole length of the pew! He also enjoyed growing flowers - yellow roses were his favorite, and reading. Bob was an avid reader of every kind of mystery he could get his hands on, and westerns too. He passed his love of reading on to all four of his children. The girls all enjoy mysteries as much as he did, and often all read the same book due to high recommendations from Dad. His son also enjoys mysteries and westerns as well. Bob passed his passion for fishing and hunting down to all of his children and grandchildren. Even his two great-grandchildren have caught onto fishing and they love it! He was also an excellent cook and was famous for his fried chicken and homemade gravy! Well, famous with his children and their friends anyway. He could also make a killer potato salad! Bob was preceded in death by his parents; wife, Sally Trammell; half sister, Mary Jane Scuderio; infant granddaughter, Emma Mae Reed; and his favorite uncle, Chet Moore. Bob is survived by his sister, Judy Henderson; his son, Eric Trammell and wife Joyce; his daughters, Denice Louk and husband Roy; Rachel Reed and husband Jeff; Bobbie Trammell and special friend Mike Barrett; his 7 grandchildren, Quenton Trammell; Morgan Parks and husband Jerry; Mason Louk and wife Miranda; Rhet and Newton Reed; Piper and James Hutchinson; his two great-grandchildren, Amelia and Aurora Parks; and nieces, nephews and cousins. Bob loved his grandchildren and great-grandchildren fiercely! He lovingly gave each and every one of them a special nickname during the first week of their tiny little lives, and that's what he called them from that day forward... He never referred to them by their given names ever again. Bob will be dearly missed by his loved ones and all who knew him, but God had a plan for him and he's now singing in the Heavenly choir for all the angels to enjoy. A graveside service for Bob will be held at 10:00 AM on Friday, December 3, 2021, at the Mount Hope Cemetery in Humboldt, Kansas. Bob's family will greet friends from 5:00 PM to 7:00 PM on Thursday evening at the Feuerborn Family Funeral Service Venue, 1883 US Hwy 54, Iola, Kansas. Memorial contributions may be made to the Bob Trammell Memorial Fund and left in care of the funeral home.

Robert "Bob" E. Trammell, age 76, of Uniontown, Kansas, went to his heavenly home on Thursday, November 18, 2021. His devotion to his family and his firm belief in God supported him and ultimately gave him peace. Bob was born on May 7, 1945,... View Obituary & Service Information

The family of Robert Eugene Trammell created this Life Tributes page to make it easy to share your memories.

Send flowers to the Trammell family.