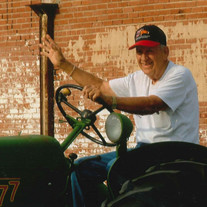 Robert Louis Messenger, age 85, of Garnett, Kansas, passed away on Tuesday, November 2, 2021, at AdventHealth of Shawnee Mission Hospital in Overland Park, Kansas. Bob was born on August 30, 1936, in Greeley, Kansas, the son of Clarence Eugene Messenger and Beatrice (Smith) Brown. From an early age Bob knew Alexander "Shorty" Earl Brown as the father figure in his life. Bob attended a one room country school near Bush City before graduating from Garnett High School with the class of 1955. He was united in marriage to Bonnie Jean Ahring on September 27, 1959. This union was blessed with two children, Debbie and Terry. After high school, Bob worked at various jobs before purchasing a farm northwest of Wellsville in 1968, and later in 1971, he expanded his business interests by opening a NAPA Auto Parts business, also located in Wellsville. Following his divorce from Bonnie and the sale of his farm in 1988, Bob married Mary Iona Marie Stuck on December 25, 1991, making their home in Ozawkie while maintaining his auto parts business in Wellsville. He sold his NAPA store in 1998 and found work in Topeka until retiring completely in 2005. Bob especially enjoyed attending his grandchildren's sporting events as they grew from children to high school athletes. After retirement, Bob was happy to return to Garnett in 2006 and build his home on Park Road with his son, Terry. He and Mary enjoyed traveling after retirement, and these trips often resulted in a Fenton glass discovery for Mary's collection. Living in Garnett, Bob spent countless hours on his passion for antique tractors, tending his immense assortment of flowers that surrounded his home, and serving as a Board member in the Power of the Past Antique Tractor and Engine Association in Ottawa. Bob treasured his morning visits with the guys at the local coffee shop and his monthly class reunion breakfasts. Bob was preceded in death by his parents; his wife Mary Messenger; brother, Clarence Eugene Messenger II and his wife Mary; sister-in-law Velma Messenger; sister Betty Denniston and her husband, Don. Bob is survived by his children; son Terry Messenger and wife Vicki of Ottawa; daughter Debbie Perez of Gardner, Kansas; four grandchildren, Logan and Carter Messenger of Ottawa; Mario, Jr and Antonio Perez of Gardner; brother Jack Messenger of Harlan, Iowa; brother Ray Brown and wife, Kim of Lawrence; sister Mary Irene Lamb and husband, Eddie of Osawatomie, plus numerous nieces and nephews. Funeral services will be held at 10:30 AM on Monday, November 8, 2021, at the Feuerborn Family Funeral Service Chapel in Garnett, Kansas. Burial will follow in the Garnett Cemetery. Bob's family will greet friends from 1:00 PM to 3:00 PM on Sunday afternoon at the funeral home. Memorial contributions may be made to Power of the Past and left in care of the funeral home. Condolences may be sent to the family at www.feuerbornfuneral.com.

The family of Robert Louis Messenger created this Life Tributes page to make it easy to share your memories.

Send flowers to the Messenger family.