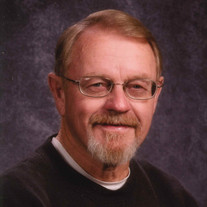 Robert L. "Butch" Lytle, age 76, of Colony, passed away on Tuesday, January 25, 2022, at home, while in the care of his loving family and Good Shepherd Hospice. He was born April 1, 1945, in Garnett, Kansas, the son of Robert "Bud" and Betty (Schumaker) Lytle. Butch graduated from Garnett High School with the Class of 1963. Butch married Vicky Potter on October 19, 1965 in Caldwell, Kansas. They were married for 46 years and during this union, they were blessed with two daughters. For a majority of his life, he was a member of Millwright Union Local #1529. After retirement, he traveled across the country where he was a vendor at many classic car shows. In 1993, he made his home in Colony, Kansas. While living in Colony, he enjoyed driving the Crest School Bus while employed by USD #479. He was a member of the Anderson County Volunteer Fire Department, a longstanding member of the Colony Lions Club and the Anderson County Historical Society. He was also a member of the First Christian Church of Garnett. During his life, he enjoyed attending the Anderson County Sale Barn on Tuesday mornings, swap meets all over the state of Kansas, and tinkering in his shop or barn. In frequent years, he also enjoyed watching his great grandkid's sporting events and cheering on the Chiefs with his family on Sundays. He was preceded in death by one daughter, Deborah K. Lytle; parents, Bud Lytle and Betty Cope; and mother and father-in-law, Albert and Beverly Potter. Butch is survived by Vicky Lytle, of Colony, Kansas; one daughter, Tracy Kellar of Colony, Kansas; four grandchildren, Amanda and Casey Church of Piqua, Kansas, Jimmy "Bud" Kellar Jr. of San Antonio, Texas, Hunter Kellar of St. Louis, Missouri, Madison and Ethan Fulton of Colony, Kansas; five great grandchildren, McKenna Jones, Kreed Jones, Kross Jones, Adelynn Fulton, and Kwynn Church; one brother, Joe and Betty Lytle of Richmond, Kansas; multiple nieces, nephews and friends. Funeral services will be held at 1:00 PM, on Wednesday, February 2, 2022, at the Feuerborn Family Funeral Service Chapel, Garnett, with burial to follow in the Garnett Cemetery. The family will greet friends at the funeral home on Tuesday evening, from 5:00 PM to 7:00 PM. In lieu of flowers, memorial contributions may be made to St. Jude's Children's Research Hospital or to the Anderson County Historical Society. You may send your condolences to the family at www.feuerbornfuneral.com. Robert "Butch" Lyle's funeral service can be watched here: https://vimeo.com/672876049 Robert "Butch" Lyle's graveside service can be watched here: https://vimeo.com/event/1795791

Robert L. "Butch" Lytle, age 76, of Colony, passed away on Tuesday, January 25, 2022, at home, while in the care of his loving family and Good Shepherd Hospice. He was born April 1, 1945, in Garnett, Kansas, the son of Robert "Bud" and Betty... View Obituary & Service Information

The family of Robert "Butch" Lytle created this Life Tributes page to make it easy to share your memories.

Send flowers to the Lytle family.