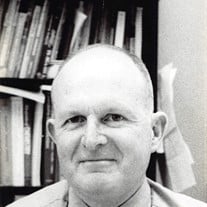 Robert William Barclay, age 90, of Iola, Kansas, passed away August 23, 2021, at Windsor Place, Iola, Kansas. Bob was born March 9, 1931, in San Antonio, Texas, to Roy Barclay and Eddie (Waller) Barclay. Bob graduated from high school in Garden City, Kansas. After high school, he joined the United States Navy and served in the Korean War from 1950-1954. He was awarded the Korean Service Medal (3 stars), Good Conduct Medal, United Nations Service Medal, and the National Defense Service Medal. After returning from service, Bob attended college and graduated from Garden City Junior College with an Associate's Degree (1956), Pittsburg Teachers College, Pittsburg, Kansas, with a Bachelor's Degree (1958), Master's Degree (1963), and a Specialist Degree (1972). Bob and Norma D. (Utermeohlen) Barclay were married August 25, 1957, in Pittsburg, Kansas. They moved to Iola in August, 1959, when Bob took a job as chemistry instructor at Iola Junior College. Bob, known to his students and co-workers as Disco Bob in the 70's and Boogie Bob in the 80's and early 90's, enjoyed playing music prior to college ballgames, DJing at college and area high school dances, Christmas parties, etc. Bob enjoyed teaching and advising college students, going the extra mile to ensure all of them succeeded. He was so proud of the number of his chemistry students and advisees who went on to become doctors, nurses, pharmacists, chemical engineers, etc. Bob retired from teaching at Allen Community College in July, 1995; however, Mr. B, as he was known in his later years, remained at the college overseeing Campus Services until he retired from that position in May, 2017. Bob was a long-time member of the First Christian Church, Iola, Kansas. Bob was preceded in death by his wife, Norma; his sister, Ann Staats; and brother, Ralph Barclay. Bob is survived by his son, Neal (Marie) Barclay, Iola, Kansas; three grandchildren, Kristin Roach (Gary), Hannah Brown (Garrett), Aaron Barclay; five great-grandchildren; and sister. Barbara Cunningham. A visitation will be from 5:00 p.m. to 7:00 p.m. on Monday, August 30, 2021, in the chapel at Feuerborn Family Funeral Service, 1883 US Highway 54, Iola, Kansas. A graveside service will be at 10:00 a.m. on Tuesday, August 31, 2021, in Highland Cemetery, Iola, Kansas. In lieu of flowers, the family requests memorials in Bob's honor be made to the Robert Barclay Scholarship at Allen Community College, and may be left with Feuerborn Family Funeral Service. Condolences for the family may be left at www.feuerbornfuneral.com.

The family of Robert William Barclay created this Life Tributes page to make it easy to share your memories.

Send flowers to the Barclay family.