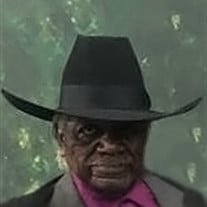 Richard Lee Wallace, age 86, of Iola, Kansas passed away at his home on December 17, 2021. Richard was born June 6, 1935 in Iola, Kansas to John Wallace and Lucille Wallace. Richard was a lifelong resident of Iola, graduating from Iola High School in 1953. He married Irene Louise Davis in Iola, Kansas. They were blessed with four children, Richard, Selina, Anthony and Juan. Richard worked as a butcher and supervisor of the kill floor at M & M Packing for over 25 years. He then worked as a custodian at Miller's Dress Factory for over 20 years before going to work at Berg / Midland. He worked as a machine operator and forklift driver for over 20 years until the plant closed down. Richard was most often seen in his cowboy boots and hat, that was more than his apparel, it was his persona. He loved all things cowboy related, especially watching any western on TV and listening to country music. Richard was an excellent dancer and he never turned down a chance to dance. He loved cars, fixing cars, looking at cars, but especially driving them. Throughout his lifetime Richard raised and trained countless bird dogs. One of his greatest joys was hunting behind Pointers that he trained. Richard also enjoyed all kinds of fishing, football and track. He was preceded in death by his parents, John and Lucille Wallace; one sister, Betty Bruce and her husband, Hubert; and one sister-in-law, Peggy Wallace. Richard is survived by his wife Irene, of the home; three sons Richard Wallace of Fort Scott, Kansas, Anthony Wallace of San Diego, California, and Juan Wallace of Spring Valley; one daughter, Selina Wallace of Iola; brother, John Wallace, Jr. of Iola; five grandchildren, Noah Wallace, SaBrina Wallace, Erin Johnson, Fryendz Wallace, Stanford Wallace; two great-grandchildren, Cameran and Keion Johnson; and nieces and nephews Blaine Wallace, Kelly (Alvin) Robinson, Derek Wallace, Theresa Bruce, Hubert Bruce, Jeffery Bruce, Chris Bruce, Andrea Dillingham and Lea (Doug) Thomas. Services for Richard Wallace will be held on Tuesday, December 28, 2021, at 10:00 AM at Covenant of Faith Christian Church with the Reverend Phil Honeycutt officiating. Burial will follow at Highland Cemetery in Iola, Kansas. Condolences for the family may be left at www.feuerbornfuneral.com

Richard Lee Wallace, age 86, of Iola, Kansas passed away at his home on December 17, 2021. Richard was born June 6, 1935 in Iola, Kansas to John Wallace and Lucille Wallace. Richard was a lifelong resident of Iola, graduating from Iola High... View Obituary & Service Information

The family of Richard Lee Wallace created this Life Tributes page to make it easy to share your memories.

Richard Lee Wallace, age 86, of Iola, Kansas passed away at his...

Send flowers to the Wallace family.