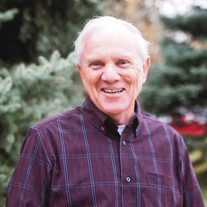 Richard Lee Tush, age 74, of Eureka, Kansas, passed away on Wednesday, May 26, 2021, at his home. Rick was born on October 6, 1946, in Garnett, Kansas. He was the fourth of seven children born to George Tush Sr. and Mary Ann (Kueser) Tush. Rick grew up in the Welda area, where he attended high school in Welda, before transferring to Greeley High School to play basketball. He graduated with the class of 1965. Following high school Rick partied at Emporia State for one year before being drafted into the US Army. Rick was a radio operator during the VietNam War, he was honorably discharged in 1969. Rick returned to Welda and began working at the Sunflower Army Ammunition Plant in De Soto, Kansas. On July 3, 1971 Rick was united in marriage to Nancy Adams in Colony, Kansas. Their union was blessed with two children, Jennifer and Daniel. Rick returned to Emporia to pursue a biology degree. In 1974 he earned his bachelor's degree from ESU. Rick began his career as a wildlife biologist at the fish hatchery in Pratt, Kansas. His career spanned 39 years and led him to Eureka, Kansas in 1978. Rick was blessed to have a career that coincided with his passion for the outdoors, he was proud of the work he was able to participate in. Some of his favorite projects included introducing turkeys to Kansas, banding doves and teaching hunter's safety education and wildlife conservation to landowners. Rick's love of the outdoors was more than a passing phase, throughout his life he loved training Daryll to be a bird dog and then his German Shorthair, Chester and Sadd. He loved hunting (despite being shot three times and none of them were while in the military) and fishing, watching birds as well as hunting birds, trapping and gardening. His grandchildren were the closest thing challenging his love of his dogs, Rick especially loved dancing (in his underwear) and playing ball with them. Rick and Nancy enjoyed going to concerts and traveling to KU basketball, KC Chiefs and Royals games. He spent many years coaching little league in Eureka and Garnett. Rick enjoyed countless family card games and he spoke fondly of their family trip to Yellowstone. He was preceded in death by his parents; grandson, Nathan Mock; sister, Shirley Watt; and brother, George "Bud" Tush Jr. Rick is survived by his wife of 49.9 years, Nancy of the home, daughter, Jennifer Tush of Eureka, son, Daniel Tush and wife, Rachael Lane of Lawrence, four grandchildren, Danielle, Angela, Jacob, and Tylor; six great grandchildren, Lilyann, Korbynn, Jayden, Aiden, Hunter, and Braelynn; two brothers and two sisters, Gordon Tush and wife, Char of Lincoln, Nebraska, Karen Meliza and husband, Oliver of McClouth, Kansas, Sharon Tush of McClouth, Kansas, and Daryll Tush and wife, Susan of Tuttle, Oklahoma; and many nieces and nephews. Funeral services will be held at 10:30 AM on Tuesday, June 1, 2021, at the Feuerborn Family Funeral Service Chapel, 219 S. Oak St.,Garnett, Kansas 66032. Inurnment will take place at a later date. The funeral home will be open after 3:30 PM for Rick's family to greet friends from 5:00 PM to 7:00 PM on Monday evening at the funeral home in Garnett. Memorial contributions may be made to Kansas Nature Conservancy or to the Welda Community Building or to GWCH Home Health and left in care of the Feuerborn Family Funeral Service, PO BOX 408, Garnett, Kansas 66032. Condolences may be sent to the family at www.feuerbornfuneral.com.

Richard Lee Tush, age 74, of Eureka, Kansas, passed away on Wednesday, May 26, 2021, at his home. Rick was born on October 6, 1946, in Garnett, Kansas. He was the fourth of seven children born to George Tush Sr. and Mary Ann (Kueser) Tush.... View Obituary & Service Information

The family of Richard Lee Tush created this Life Tributes page to make it easy to share your memories.

Send flowers to the Tush family.