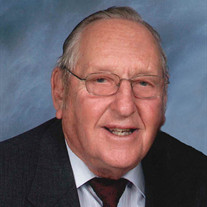 Richard LeRoy Singer, age 94, of Garnett, Kansas, passed away on Sunday, September 26, 2021, at Residential Living Center, Garnett. He was born October 14, 1926, in Moran, Kansas, the son of LeRoy Glen and Leta Edith (Ford) Singer. Richard graduated from Moran High School with the Class of 1943. He joined the United States Army in January 1945 and served in occupied Japan until November 1946. Richard married Vera Pauline Ard on May 12, 1951, in Bronson, Kansas. This union was blessed with eight children. After his service he worked with his father and brother for Singer and Sons Implement Company in Savonburg, Kansas. Richard and family moved to Garnett in 1961, where he owned and operated Singer Plumbing & Electric until retirement. A storyteller at heart, Richard didn't know a stranger and could recall events and dates that he shared in sometimes lengthy fashion with whomever he met. He loved to travel, play cards and games, read books, watch sports and enjoyed many of his children and grandkids sporting events. His children and grandchildren were his most prized possessions. He was a member of the Kansas Plumbing, Heating & Cooling Contractors Association, serving as President from 1981 to 1982, in addition, he served on the Board of Directors for several terms. He also served as the Matron for Order of the Eastern Star in Savonburg. Richard was a member of First United Methodist Church, a 73 year member of V.F.W. Post #6397, serving as Commander, Quarter Master & many more positions including Post Color Guard. He was also a Garnett Lions Club member since 1962 serving multiple positions, notably being the Lions' treasurer at the age of 94. Richard was preceded in death by his parents, LeRoy and Leta (Ford) Singer; his wife, Vera Singer on December 11, 2017; one brother, Lawrence Singer; and one sister, Evelyn Boyd. He is survived by his children, Sue Ward and husband Bill of Warsaw, Missouri; Sherri Scott of Garnett, Kansas; Randy Singer and wife Terry of Lawrence, Kansas; Phil Singer and wife Keren of Lancaster, Kentucky; Doug Singer of Osawatomie, Kansas; Lynn Miller and husband Dr. Jim of Butler, Missouri; Teresa Young and husband Doug of Burlington, Kansas; Stacey Dennison and husband Ed of Garnett; thirteen grandchildren; and seven great grandchildren; and one great-great granddaughter; many nieces, nephews, and friends. Funeral services will be held at 11:00 a.m., on Saturday, October 2, 2021, at First United Methodist Church, Garnett, with burial following in the Garnett Cemetery. The family will greet friends on Friday evening, from 6:00 p.m. to 8:00 p.m., at the Feuerborn Family Funeral Service Chapel, Garnett. Memorial contributions may be made to the First United Methodist Church, V.F.W. Post #6397, or to the Garnett Lions Club. Condolences may be sent to the family at www.feuerbornfuneral.com

The family of Richard L. Singer created this Life Tributes page to make it easy to share your memories.

Send flowers to the Singer family.