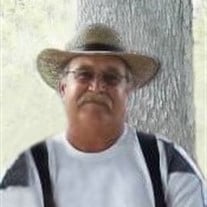 Richard Eugene Scobee, age 71, of Welda, Kansas, passed away on Wednesday, March 9, 2022, in Garnett, Kansas. He was born December 8, 1950, in Garnett, Kansas, the son of Joseph (Jack) and Vera (Ward) Scobee. Richard graduated from Garnett High School with the Class of 1968. In Richard's early years he worked several different places prior to starting his career with City Service Gas Company. This company changed names over the years and he retired with Southern Star in 2010. Richard was united in marriage with Dixie Thompson on August 4, 1973 in Welda, Kansas. They were blessed with five children in their marriage. Throughout Richard's lifetime he enjoyed many aspects of the outdoors. He enjoyed his coon dogs, hunting, trapping, fishing, and camping. Taking weekend trips to the lake. When the kids were little, his idea of a family vacation was camping at the lakes to fish! Richard always enjoyed gardening and canning, even though Dixie did most of the work! Toward the end of Richard's retirement, he and Dixie decided to try their hand at raising cattle. Even after losing Dixie, Richard still enjoyed fishing and taking his best friend Taffy with him. Taffy continued to be his faithful companion, by his side, until the day he passed. Richard was loved and will be missed by many. He was preceded in death by his parents; his wife, Dixie Scobee; infant daughter, Stephanie Machelle Scobee; one granddaughter, Theresa Ochweri; and two brothers, J.R. Scobee and Roland Scobee. Richard is survived by his four children, Jim Scobee and wife Candra of Lyons, Kansas, Robin Bliss of Halstead, Kansas, R'Donna Riri of Ottawa, Kansas, Jill Ochweri and husband Hezron of Wichita, Kansas; 13 grandchildren, Wendell, Wrikin, Kenton, Kassidy, Oceana, Kieara, Camron, Zakayo, Virginia, Jasira, Jayden, Abigael, and Sophia; three great grandchildren, Sandra, Xiomara, and Calvin; one sister, Ruth Kaufman; and several extended family members. Memorial services will be held at 10:30 a.m., on Monday, March 14, 2022, at the Feuerborn Family Service Chapel, Garnett. The family will greet friends at the funeral home on Sunday evening from 5:00 P.M. to 7:00 P.M. Memorial contributions may be made to Welda Community Building or to the Welda Fire Department. You may send your condolences to the family at www.feuerbornfuneral.com.

The family of Richard Eugene Scobee created this Life Tributes page to make it easy to share your memories.

Send flowers to the Scobee family.