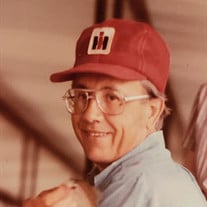 Richard Hubert Roeckers, 88, of Garnett, passed away Saturday, January 23, 2021, at the Anderson County Hospital Residential Living Center, Garnett, Kansas. Richard was born to Hubert and Carrie (Citron) Roeckers May 11, 1932, on the Miller farm west of Garnett, Kansas, the oldest of two boys. At an early age he started helping on the farm. At six years old he was driving four-in-hand horses to harrow the fields. By nine, he was driving the family tractor since his dad did not like to drive. Plowing, cultivating, and discing the fields. He attended several schools around Anderson county: Round Oak (only 4 kids), Cedar Ridge, Irving, Longfellow, Junction. He graduated from Garnett High School in 1951. During his school years he was a member and an elected president of the Lucky-13 4H Club in Genlock, Kansas and FFA Sentinel (Master of Arms) In high school he met his "Annie", Lorene Ewbank and they eloped to Nevada, Missouri on June 21, 1952. This secret was announced by the newspaper when Richard left for Navy school in Oklahoma. Richard saw many places during his four years in the Navy; California, Hawaii, Guam, Wake Island, Corregidor, Japan, Okinawa, Philippines, and Korea. In 1954, while stationed near Pensacola, Florida, their daughter Linda was born, and their first son Michael born was in 1956 at Forbes AFB, Kansas. After four years Richard was honorably discharged from the US Navy. He then enlisted in the US Air Force. Like the Navy, the Air Force made sure he saw plenty of the world as well, although for the family, Kansas was home for the next eleven years. In 1957 a second son Robin was born at McConnell AFB and a second daughter Tulora in 1965 at Forbes AFB. Richard would find himself on temporary duty to many different locations during that time; England, Spain, Libya, Alaska (4 trips), Japan, Philippine Islands, Vietnam (twice). From Forbes AFB, he would be transferred to Offutt AFB, Nebraska, where his youngest, Trina was born (for a total of 5 children). One more year spent overseas in Thailand, then up to the UP, K.I. Sawyer AFB, MI, his last orders would be to Ellsworth AFB, South Dakota. In 1976 Richard was honorably discharged and retired from the U.S. Air Force. He was immensely proud of his 25-year military career. Retiring to Topeka, Kansas he worked at Topeka Loan Shooter's Supply for 10 years. From the pawn shop, he went to work for Roach Hardware in Topeka, Kansas until retiring in 1999. In 1997, Lorene, his wife of 43 years passed away. In 1998, Richard moved back to Garnett, Kansas and the following year he met another lovely lady and on October 16, 1999 he married Shirley Gwin-Campbell at Welda, Kansas. This marriage lasted 21 years till Richard's death. Richard belonged many associations many with Shirley. He was a member of the American Legion, V.F.W, Lions Club, Knights of Columbus, Anderson County Historical Society and was a member of Kansas Archeological Association, Shawnee Chapter in Topeka. He enjoyed fishing, hunting, metal detecting and archeology. He participated on many K.A.A. digs looking for pre-historic and historic artifacts, including forts, settlements, and Native American sites. Shirley accompanied Richard on many digs including a successful one in their own yard. Richard is also preceded in death by his daughter, Linda Barker in 2012; his parents, Hubert and Carrie Roeckers; and stepmother, Beulah Roeckers. Richard is survived by his wife Shirley Roeckers of Garnett; two sons, Michael Roeckers & wife Kum Yong of Topeka, Robin Roeckers and wife Becky of Berryton, Kansas; two daughters, Tulora Roeckers, Trina Volpert and husband Jeff all of Topeka; son-in-law, Steve Barker of Rawlins, Wyoming; stepson, Mark Campbell and wife Debbi of Bastrop, Texas; stepdaughter, Kim Gruner and husband Phil of Independence, Missouri; grandchildren, Andrea Eaton, Jeremy Barker, James and Marlyn Thomas, Sarah Thomas, Robyn Thomas, Kaitlyn and Josh Ridgway, Joseph Thomas, Anissa and Ryan Baumgartner, Alexa Roeckers, Anna Roeckers, Aaron Roeckers, Amy Roeckers, Jason Gruner, Jenna Gruner, and Natalie Campbell; great grandchildren, Max and Kiana, Salina and Rob, Nico, Keira, Klaran, Tryston, Erick, Aiden, Elaina, Liam, Oliver and Nolan; brother, Henry Roeckers and wife Kay of Garnett, Kansas; stepbrother, Larry Hermreck and wife Almeda of Vera Beach, Florida; two stepsisters, Barbara Burwell of Manhattan, Kansas, Roberta Boyer of Lawrence, Kansas; brother-in-law, James Ewbank and wife Norma of Atchison, Kansas, three sisters-in-law, Happy Ewbank of Morehead City, North Carolina, Kay Gwin of Garnett, Kansas, and Zella Gwin of Salina Kansas; many nieces, nephews, extended family, and friends. Memorial services will be held at 1:00 P.M. on Saturday, June 5, 2021, at the Feuerborn Family Funeral Service Chapel in Garnett, Kansas. Inurnment will follow at the Cherry Mound Cemetery in Westphalia, Kansas. Memorial contributions may be made to Garnett VFW Post #6397, St. Rose School, or Anderson County Historical Society. You may send your condolences to the family at www.feuerbornfuneral.com.

The family of Richard H. Roeckers created this Life Tributes page to make it easy to share your memories.

Send flowers to the Roeckers family.