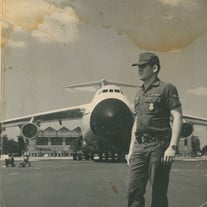 Richard Vincent (Vince) Falbo, age 71, of Colony, Kansas, passed away at his residence on July 25, 2021. Vince was born June 30, 1950, in Sacramento, California, to Vincent C. Falbo and Rose M. (Laskowski) Falbo. Vince graduated high school and then served his country in the United States Air Force from 1969 to 1974, serving in the Vietnam War. He and Dorothy Brown were married May 15, 1971, in Belton, Missouri. Vince was an ASE Mechanic his entire life and enjoyed working the scale house at Nelson Quarries the last few years before retirement. Vince loved his wife and his family! He liked cars, being outdoors, building anything, hunting, fishing, building computers and guns, and music. Vince was in attendance at the original Woodstock Festival. He was a devout American patriot! Vince was preceded in death by his parents. Vince is survived by his wife, Dorothy, of the home; his daughters, Dorothy (Darian) Nowak, Colony, Kansas, Angelique Gfeller, Paola, Kansas, Christina (Dave) Brown, Oshkosh, Wisconsin; his son, Vincent (Brittany) Falbo, Tulsa, Oklahoma; his service dog, Hawk Falbo, Colony, Kansas; sixteen grandchildren; and numerous ornery friends and loved ones. Memorials are suggested to Colony First Responders, and may be left with Feuerborn Family Funeral Service, 1883 US Highway 54, Iola, Kansas. Condolences for the family may be left at www.feuerbornfuneral.com.

The family of Richard Vincent (Vince) Falbo created this Life Tributes page to make it easy to share your memories.

Send flowers to the Falbo family.