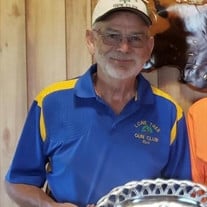 Richard Diehl, age 68, passed away Tuesday, May 3, 2022, at his home in rural Iola, Kansas. Richard was born July 1, 1953, to Vernie and Helen (Snell) Diehl in Iola. He attended Iola High School and graduated with the class of 1971 before furthering his education at Emporia State University where he received his bachelor's degree. While attending Emporia State, Richard met Shirley Feldman, whom he would later marry on August 1, 1975, in Gas, Kansas. After teaching biology in Olpe for a few years, Richard returned to Iola to work with his brother, Jerry, at Diehl's Salvage. In 1998, Richard opened 54 Rebuilders with Shirley and his son, Michael Slaven. Richard loved being outdoors, spending much time fishing, hunting, and trapshooting. He shared these passions with others, especially with the youth with his organizing various shoots including the Lone Tree Gun Club's Eastern Kansas Youth Trap Shoot. Furthermore, Richard was an expert shooter himself and even won the 2021 Kansas Trapshooting Association Kansas State Shoot's Singles 200 Straight Championship. His greatest love, though, was his wife, Shirley, followed by his dog, Jasper. Richard is preceded in death by his parents and his brothers, Don and Jerry. Richard is survived by his wife, Shirley; sons, Michael Slaven (Angie Slaven) and Ryan Diehl; daughter, Kelli Gorman; grandsons, Zachary Slaven, Dillon Slaven, and Justus Gorman; and sister, Leanna Yohe. A funeral service to honor the life of Richard will be held at 10:00 A.M. on Thursday, May 12, 2022, at Feuerborn Family Funeral Service in Iola. Burial will follow at Highland Cemetery in Iola. Family will greet friends the night prior to the service from 6:00 P.M. to 8:00 P.M. on Wednesday, May 11, 2022, in The Venue at the funeral home. In lieu of flowers, the family requests that donations in honor of Richard be made to A.C.A.R.F. of LaHarpe, Kansas, and be left with the funeral home or mailed to 1883 U.S. Highway 54, Iola, Kansas, 66749. Condolences for the family may be left online at www.feuerbornfuneral.com.

Richard Diehl, age 68, passed away Tuesday, May 3, 2022, at his home in rural Iola, Kansas. Richard was born July 1, 1953, to Vernie and Helen (Snell) Diehl in Iola. He attended Iola High School and graduated with the class of 1971 before furthering... View Obituary & Service Information

The family of Richard Diehl created this Life Tributes page to make it easy to share your memories.

Send flowers to the Diehl family.