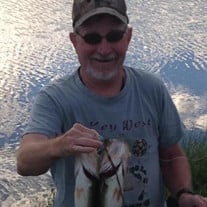 Richard G. Callihan, age 75, of Garnett, Kansas, passed away on Tuesday, January 18, 2022, at his home. He was born July 6, 1946, in Green Castle, Missouri, the son of Gail and Cleo (Hamilton) Callihan. Richard graduated from Westport High School in 1967 and attended the National College graduating with a degree in A.S. in Business Administration in 1980. Richard was an avid hunter and fisherman. Years ago, he played on a company softball team many times and and he loved spending time with his family. He enjoyed attending the grandchildren's activities, including 4H and sporting events. He was a former CNC Machinist at SOR Incorporated, in Lenexa, Kansas, starting February 3, 1968, and retiring on February 3, 2013. Richard entered the United States Army on August 16, 1968 and served in Vietnam, earning a Purple Heart Medal, a Bronze Star Medal, a Certificate of Appreciation for his testimonial of esteem and gratitude for Faithful Performance of duty. He was honorably discharged on August 14, 1970. He was preceded in death by his parents, Gail and Cleo Callihan; two brothers, Donald Callihan and Lyndall Callihan. Richard is survived by his three children, Cheryl Lies and husband Donald of Gardner, Kansas, Christina Williamson and husband John of Shawnee, Kansas, and Anthony Callihan of Garnett, Kansas; eight grandchildren, Tyler, Laura, Aley, Katelyn, Amber, Elizabeth, Sydney, and Hannah; five great grandchildren, Vivian, Violet, August, Beckett, and Matthew; three brothers, Melvin Callihan and wife Vi of Milan, Missouri, Jack Callihan and wife Phyllis of Cleveland, Ohio, and Russ Callihan of Iola, Kansas; and many extended family and friends. Memorial service will be held at 10:00 a.m., on Saturday, January 29, 2022, at Feuerborn Family Funeral Service Chapel, Garnett, with inurnment to follow at 2:00 p.m., at Forest Hill Calvary Cemetery, Kansas City, Missouri. You may send your condolences to the family at www.feuerbornfuneral.com. Richard Callihan's memorial service can be watched here: https://vimeo.com/670892500

Richard G. Callihan, age 75, of Garnett, Kansas, passed away on Tuesday, January 18, 2022, at his home. He was born July 6, 1946, in Green Castle, Missouri, the son of Gail and Cleo (Hamilton) Callihan. Richard graduated from Westport High... View Obituary & Service Information

The family of Richard G. Callihan created this Life Tributes page to make it easy to share your memories.

Send flowers to the Callihan family.