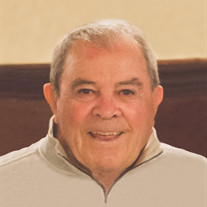 Richard Conrad Adler passed away on February 27, 2021 after a life lived to the fullest. Loyal and generous, Dick was a people person, creating not only a loving family but also a lifetime of friendships. He loved hunting for elk and quail, fishing for trout, and perfecting his golf swing. Dick was born in St. Louis on July 5, 1934 to Katherine Weigle Adler and Clarence J. Adler. He attended Webster Groves High School where he excelled in sports as captain of both the football and baseball teams. At the University of Missouri, he was on the 1954 NCAA Championship baseball team. He was a proud member of the Sigma Chi Fraternity, Alpha Chapter. Dick joined the Missouri Air National Guard in the pilot training program in 1957. His military career spanned a total of 3 months when he was honorably discharged after the U.S. cut back the manned aircraft program. He moved to Kansas City and went to work for H. O. Peet and Co. as a stockbroker. In 1961 he married Lynda Dick; beloved daughters Ellen and Jill were born. Dick founded R.C. Brokerage in 1963 as a manufacturers' representative specializing in packaging and ingredients. In 1998, he co-founded Food Trends, Inc., with Ron Martin and Doug Youngblood from which he retired in 2017. In 1973 he joined Wolf Creek Golf Club and became an owner in 1977. That year he married Karen Conde. Together they traveled, fly fished, hunted quail and pheasant, and enjoyed good wines and delicious game dinners. Dick was preceded in death by his mother and loving stepfather Leonard Abernathy, his father and dear stepmother Estelle Buemel Adler Polizzi. He is survived by his devoted wife, Karen; daughters, Ellen Young, and Jill Donnici and husband, Jimmy; three grandchildren Margaret Young, Victoria Donnici and James Donnici. Dick's family is especially thankful to his caregiver, Andy Johannes. In 2018, Dick was baptized into the Catholic church. Dick's family will celebrate Mass of Christian Burial on Thursday, March 4, 2021 at Queen of the Holy Rosary Wea, Bucyrus, Kansas. Due to Covid-19 protocols attendance to the service will be limited to family and invited guests, those unable to attend will be able to view the live-stream via www.feuerbornfuneral.com. In lieu of flowers, the family kindly requests contributions to Queen of the Holy Rosary Wea.

Richard Conrad Adler passed away on February 27, 2021 after a life lived to the fullest. Loyal and generous, Dick was a people person, creating not only a loving family but also a lifetime of friendships. He loved hunting for elk and quail,... View Obituary & Service Information

The family of Richard C. Adler created this Life Tributes page to make it easy to share your memories.

Send flowers to the Adler family.