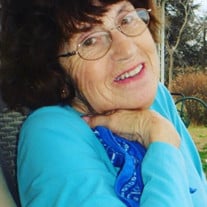 Reta Earlene Stanley passed away Monday, October 4, 2021, at Greystone Assisted Living in Iola, Kansas. Reta was born April 17, 1937, to Irvin and Wilma (Donaldson) Gregg in Iola, Kansas. She married Marvin Stanley on February 28, 1959. They were blessed with three children that they raised on farms near LaHarpe and Moran, then finally settled on the family farm near Elsmore in 1968. She enjoyed taking care of her flowers and doing needlework projects. Reta's greatest joy was spending time with family, sharing her never-ending gentle love. Reta was preceded in death by her husband, Marvin; son, Kenneth; parents, Irvin and Wilma; brother, Marvin; and sister, Nina. Reta is survived by her daughters, Vickie (Jerald) Smart of Moran, and Lisa (Jerry) Lynch of Olathe; grandchildren, Derek (Kim) Hanson, Kayla (Chris) Raider, Dustin (Rochelle) Smart, and Danielle Lynch; great-grandchildren, Kolton Hanson, Kallie and Kaelynn Caldwell, Dylan, Logan, Tucker, and Oakley Raider, Jayden, Lilly and Jessie Smart, and Madison Swink; and a sister, Dee (Wayne) Shultz. Funeral services to honor the life of Reta will be held at 10:00 A.M. on Thursday, October 7, 2021, at Feuerborn Family Funeral Service in Iola, Kansas. Burial will take place following the service in Moran Cemetery, Moran, Kansas. Family will greet friends from 6:00 P.M. to 8:00 P.M. on Wednesday, October 6, 2021, the night prior to the service in The Venue at the funeral home. Memorials in honor of Reta are suggested to A.C.A.R.F. of LaHarpe and may be left with the funeral home or mailed to 1883 U.S. Highway 54, Iola, Kansas, 66749. Condolences for the family may be left online at www.feuerbornfuneral.com.

The family of Reta Earlene Stanley created this Life Tributes page to make it easy to share your memories.

Send flowers to the Stanley family.