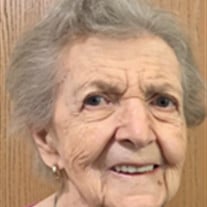 Reta Fern (Blake) Ensminger passed away on Thursday, July 8, 2021, in Olathe, Kansas at the age of 86. Reta was born on January 30, 1935, in Redfield, Kansas to Lloyd and Fern (Swank) Blake. She graduated from Fort Scott High School, Mercy School of Nursing, and Allen County Community College. Reta married Alden Ensminger in Lamar, Missouri on December 31, 1960. Together they made their home in Moran, Kansas until moving to Olathe, Kansas in 2017. Of the marriage were born three children, Lila (Steve) Bayer of Springdale, Arkansas, Aldie (Bev) Ensminger of Atchison, Kansas, and Kendra Haen of Gardner, Kansas. Reta was very active in her church being a Confirmation Mentor and received the Presbyterian Woman's Award. Reta was a life-long member of the Sunshine Club. She was a very creative woman in her painting, crafts, sewing, and knitting. Reta is survived by her three children; sister-in-law, Barbara (EJ) Siefker; brother-in-laws HR Siefker and David Ensminger; 10 grandchildren; and 10 great-grandchildren. Reta was preceded in death by her parents; husband, Alden, of 58 years; brother, Kenneth Blake; sisters, Waneda Roberts, Ethel Clem, Bernice Hinton, Carol Easter, and Ruth Sherill; and great-grandson Moxxlee Jax McGlynn. Services to honor the life of Reta will be held at 10:00 A.M. on Wednesday, July 14, 2021, at the First Presbyterian Church in Iola, Kansas. Family will greet friends from 5:00 P.M. to 7:00 P.M. in The Venue at Feuerborn Family Funeral Service in Iola on Tuesday, July 13, 2021, the night prior to the service. Cremation will take place and inurnment will be held at a later date. Memorials in honor of Reta are suggested to the First Presbyterian Church of Iola or the National Kidney Foundation in lieu of flowers. Memorials can be left with the funeral home or mailed to 1883 U.S. Highway 54, Iola, Kansas, 66749. Online condolences are welcomed at www.feuerbornfuneral.com.

Reta Fern (Blake) Ensminger passed away on Thursday, July 8, 2021, in Olathe, Kansas at the age of 86. Reta was born on January 30, 1935, in Redfield, Kansas to Lloyd and Fern (Swank) Blake. She graduated from Fort Scott High School, Mercy... View Obituary & Service Information

The family of Reta Fern (Blake) Ensminger created this Life Tributes page to make it easy to share your memories.

Send flowers to the Ensminger family.