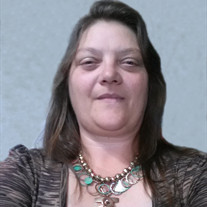 Regina Marie Romig Miller, age 52, of Garnett, Kansas, passed away on Tuesday, November 30, 2021, at her home. She was born January 14, 1969, in Kansas City, Kansas, the daughter of Ronald and Roberta (Hill) Romig. Regina married Randall A. Miller on November 8, 1997 in Garnett. This union was blessed with one daughter, Catherine M. Miller Noland and guardianship of Eva Brecheisen. She was a C.N.A. at several local nursing homes for many years. Regina helped with the local family business, R & R Lawn Mowers Repair. She enjoyed the outdoors, including camping and horse riding. Regina had a love for animals and was an amazing artist. Regina received the Order Molly Pitcher Award from the National Guard for the role of family support coordinator for three years. This was the highest non military award given to a civilian. She was preceded in death by her grandparents, Robert and Aleene Hill; and Ralph and Hazel Romig. Regina is survived by her husband, Randy Miller, of the home; two daughters, Catherine Noland and husband Samuel of Iola, Kansas, Eva Brecheisen of Garnett; one grandson, Everett Noland; parents, Ronald and Roberta Romig; one brother, Richard Romig of Garnett; and several extended family members and friends. Funeral services will be held at 1:30 p.m., on Tuesday, December 7, 2021, at the Feuerborn Family Funeral Service Chapel, Garnett, with burial to follow in the Garnett Cemetery. The family will greet friends at the funeral home on Monday evening from 5:00 p.m. to 7:00 p.m. Memorial contributions may be made to the Regina Miller Memorial Fund, which will be used later to build a garden pond, in her memory. You may send your condolences to the family at www.feuerbornfuneral.com.

The family of Regina Marie Miller created this Life Tributes page to make it easy to share your memories.