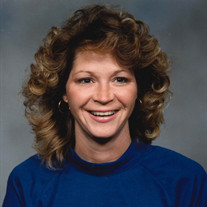 Rebecca J. Hiles, age 65, of Garnett, Kansas, passed away on Saturday, September 11, 2021, at her home. Becky was born on March 31, 1956, in Garnett, Kansas. She was the second of five children born to John Edwin and Rita Luquinn (Holloran) Marmon. Becky graduated from Garnett High School with the Class of 1974. On November 8, 1975, Becky was united in marriage to Ronald A. Hiles. This union was blessed with five daughters. Becky gave birth to their first daughter, Brianna in 1977. Their second daughter, Miranda, was born in 1980. In 1981 they were blessed with the surprise of identical triplets, Aislynn, Jocelyn and Corinne. They first made their home in Garnett, where Becky began working in the Anderson County Treasurer's Office. In 1978 they moved to Lawrence until returning to Garnett in 1981. Becky then worked as an EMT for Anderson County Hospital for several years. Becky later moved with her girls to Topeka, and later moved to Arlington, Texas in 1993. In 2003 she returned to the Garnett area to care for her dad. Throughout her career Becky worked in various jobs in the healthcare field. Her compassion for others, led her to specialize in the hospice field, where she concluded her career. Becky was the essential caregiver, always willing to care for others in their time of need. She truly embodied the phrase that "she never met a stranger" and she loved to make people feel special. Her personality was larger than life, her ability to brighten the room will be missed. Becky loved the simple pleasures in life, a glass of wine, chickens on the farm and her dogs, Maggie, May Bell, and Susie. Becky always looked for a reason to have her family and friends together. She referred to almost everyone as "her baby". One of her greatest joys was doting over her grandchildren. Becky was preceded in death by her parents, John and Luquinn Marmon; two brothers, John and Jeffery Marmon; and granddaughter, Kaycie Johnson. She is survived by her daughters, Brianna Hiles (Roy Salazar) of Garnett, Kansas, Miranda Redin (Beau) of Olathe, Kansas, Aislynn Bellinger (Kevin) of Garnett, Jocelyn Hiles of Garnett, and Corinne Grabill (Kerry) of St. Joseph, Missouri; fifteen grandchildren; three great grandchildren; two sisters, Milissa Marmon (A. Del Quest) of Eugene, Oregon and Stephanie Culp (Cary) of Lawrence, Kansas; and sister in law, Elizabeth Marmon of Topeka. Mass of Christian Burial will be held at 10:30 AM, Thursday, September 16, 2021, at Holy Angels Catholic Church, Garnett, Kansas. Burial will follow in the Holy Angels Cemetery, Garnett. There will be a time of family sharing and remarks at 6:00 PM with visitation to follow until 8:00 PM on Wednesday evening at the Feuerborn Family Funeral Service Chapel, 219 S. Oak St.,Garnett, Kansas 66032. Memorial contributions may be made to the Becky Hiles Memorial Fund and left in care of the funeral home. Condolences may be left for the family at www.feuerbornfuneral.com.

Rebecca J. Hiles, age 65, of Garnett, Kansas, passed away on Saturday, September 11, 2021, at her home. Becky was born on March 31, 1956, in Garnett, Kansas. She was the second of five children born to John Edwin and Rita Luquinn (Holloran)... View Obituary & Service Information

The family of Rebecca J. Hiles created this Life Tributes page to make it easy to share your memories.

Send flowers to the Hiles family.