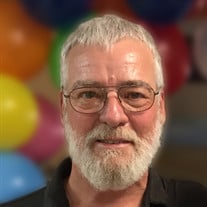 Randy Noel Vanatta, age 63, passed away Sunday, October 10, 2021, at his home in Chanute, Kansas. Randy was one of eleven children born to Tom Charles and Leola Mae (Zornes) Vanatta on December 25, 1957, at Allen County Hospital in Iola, Kansas. He married Sharon Stroud. Their union was blessed with two children, Aaron and Clinton. They later divorced. He worked at IMP Boat Plant in Iola, Kansas as a welder until the early 1990's when he branched off on his own, opening his welding business, Moran Portable Welding, out of a shop in Moran, Kansas. He owned and operated his welding business for the rest of his working career. Randy had a heart of gold, was extremely caring, and was known as a lover. He was a hard worker and dedicated many years to building his business. Anything that you needed made out of steel, Randy was the man for the job. From artwork to truck beds to swing sets, he could build anything imaginable. He loved his grandchildren and spent as much time with them as he could. He was an avid fisherman and could cook the best fish around. Randy loved to play guitar, banjo, violin, and numerous other instruments. He was quite the storyteller and always had a new story to tell. Always keeping you on your toes and laughing when you were around him. He will be greatly missed. Randy is preceded in death by his parents, Tom and Leola Vanatta. Randy is survived by significant other of 15 years, Lucy Trester; children, Aaron Vanatta and Clinton (Katy) Vanatta; brothers, George, Kirby, Rex, Melvin, Max, Richard, and Joe Vanatta; sisters, Helen Franco, Sara Miller, and Betty Reeder; grandchildren, Maddy McVey, Jayden Cranor, Aaliyah Lowry, Micah Lowry, and Axel Vanatta; his four legged baby, Bella Sue; and numerous other family members and friends. A funeral service to honor the life of Randy will be held at 10:00 A.M. on October 15, 2021, at Feuerborn Family Funeral Service in Iola, Kansas. Burial will follow at Fairview Cemetery in Mildred, Kansas. Family will greet friends from 6:00 P.M. to 8:00 P.M. in The Venue at the funeral home on October 14, 2021, the night prior to the service. Memorials in honor of Randy are suggested to A.C.A.R.F. of LaHarpe, Kansas, and may be left with the funeral home or mailed to 1883 U.S. Highway 54, Iola, Kansas, 66749. Condolences for the family may be left at www.feuerbornfuneral.com. Randy Noel Vanatta's funeral service can be watched here: https://vimeo.com/632330347

The family of Randy Noel Vanatta created this Life Tributes page to make it easy to share your memories.

Send flowers to the Vanatta family.