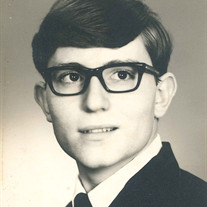 Randy L. Linthicum went to be with his Heavenly Father on September 5, 2021, at his home surrounded by his family. Randy was born April 30, 1952, to Dessie (Gregg) and Virgil Linthicum in Iola, Kansas. He graduated from Iola High School with the class of 1970. After attending Allen Community College, Randy selflessly served in the United States Army from 1972 to 1974. After serving, he worked at Thompson Chicken Factory. He then began working at Gates Rubber Company in Iola, Kansas where he retired after 37 years. He married the love of his life and soul mate, Becky D. Linthicum, on January 1, 2000. You could find Randy with his life's greatest treasures, his family, goofing around, being ornery, and smiling that contagious smile. He adored attending his grandchildren's sporting events. He will be and already is terribly missed by his beloved wife, family, and friends. Randy is preceded in death by his parents, Virgil and Dessie Linthicum; uncle, Ralph Myrick; mother-in-law, Ione Gineste; father-in-law, Billy Bills; and step-father-in-law, Charles Gineste. Randy is survived by his wife of the home, Becky Linthicum; children, Chad Sigg and wife, Veronica, of Topeka, Kansas, and Courtney Orth and fiance, Beto Melendez, of Humboldt, Kansas; grandchildren, Brecken Sigg, Tanner Orth, Madison Johnston, Alex Melendez, Briar Orth, Addison Sigg, Carter Johnston, Lulu Melendez, and Tori Melendez; siblings, Sam Linthicum, Linda Cyrus, Mary Jane Garver, and Ginger Roush; brother-in-law, Craig Bills and wife, Mary; favorite aunt, Pat Myrick; numerous nieces and nephews; and numerous other family members and friends. Cremation has taken place. A private family inurnment will take place at Highland Cemetery in Iola, Kansas. Family will greet friends from 4:00 P.M. to 6:00 P.M. on Friday, September 17, 2021, in The Venue at Feuerborn Family Funeral Service. Memorials in honor of Randy are suggested to Wings of Warriors, St. Luke's Hospice, or A.C.A.R.F. of LaHarpe, Kansas and may be left with Feuerborn Family Funeral Service in Iola or mailed to 1883 U.S. Highway 54, Iola, Kansas, 66749. Condolences for the family may be left online at www.feuerbornfuneral.com.

Randy L. Linthicum went to be with his Heavenly Father on September 5, 2021, at his home surrounded by his family. Randy was born April 30, 1952, to Dessie (Gregg) and Virgil Linthicum in Iola, Kansas. He graduated from Iola High School... View Obituary & Service Information

The family of Randy L. Linthicum created this Life Tributes page to make it easy to share your memories.

Randy L. Linthicum went to be with his Heavenly Father on September...

Send flowers to the Linthicum family.