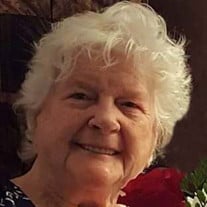 Queen Eileen Rinehart, age 96, passed away Friday, October 15, 2021, at her home in Humboldt, Kansas. Queen was born October 14, 1925, to Otto Alfred and Cora Mae (Stroup) Powers in El Dorado, Kansas. She attended school in Iola. On November 19, 1942, she married Thomas Greely Rinehart in Kansas City, Kansas. They made their home in Humboldt together. Their union was blessed with four children. Queen dedicated her life to raising her children, helping her husband, and being a homemaker. Queen loved sewing and quilting. You could also find her fishing in her spare time. She loved spending time with her family. Holiday dinners always took place at her house and she prepared a large meal for everyone. Scrabble, Yahtzee, and Mexican Train were games that you could find Queen playing with the grandchildren. Queen lived up to every bit of her name. She was always a queen and had a beautiful smile that will be greatly missed. She was a beautiful person inside and out that focused on being the best mother and grandmother she could possibly be. Queen is preceded in death by her husband, Thomas G. Rinehart; parents, Otto and Cora Powers; and siblings, Hazel Jones, Juanita Ross, Alfred Powers, Glenn Powers, and infant brother. Queen is survived by her children, Sandra Hamilton, John Rinehart, Peggy Murrell, and Patricia Millar; sister, Mary Reaves; numerous grandchildren, great-grandchildren, and great-great-grandchildren; and numerous other family members and friends. Family will greet friends from 6:00 P.M. to 8:00 P.M. on Friday, October 22, 2021, in The Venue at Feuerborn Family Funeral Service. Inurnment will take place at a later date. Memorials in honor of Queen are suggested to the American Heart Association and may be left with the funeral home or mailed to 1883 U.S. Highway 54, Iola, Kansas, 66749. Condolences for the family may be left online at www.feuerbornfuneral.com.

The family of Queen Eileen Rinehart created this Life Tributes page to make it easy to share your memories.

Send flowers to the Rinehart family.